Blinken Suggests All Pacific Countries Ready to Sign Pact With US 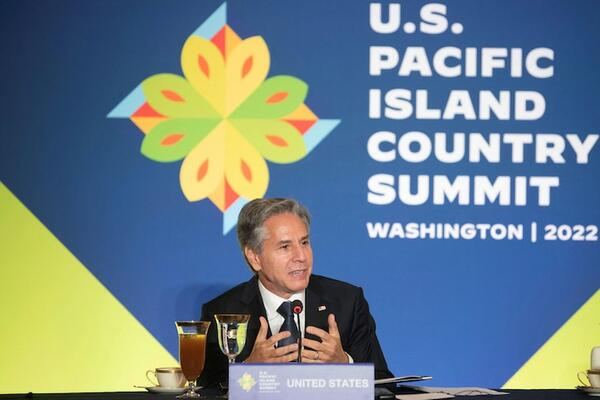 Mr Blinken greeted each of the Pacific Island leaders gathered in a diplomatic reception room at the State Department at the opening of the summit, before pledging closer cooperation with the region.
Source: Supplied
Share
Friday, 30 September 2022 13:31 PM

US Secretary of State Antony Blinken says Pacific Island nations have agreed to a "new partnership" with the United States ahead of a meeting with President Joe Biden on Friday.

Pacific leaders sat down with Mr Blinken and a host of senior officials in Washington on Thursday on the first day of a historic White House summit.

The Biden Administration has promised to unveil "substantial" new pledges tomorrow as it moves to ramp up America's diplomatic, commercial and development presence in the region.

Mr Blinken greeted each of the Pacific Island leaders gathered in a diplomatic reception room at the State Department at the opening of the summit, before pledging closer cooperation with the region.

"What I hope that you take away from these engagements is that the United States shares your vision and we are committed to help realise it," he said.

"It's a vision that recognises that only by working together, can we actually tackle the biggest challenges of our time, that confront all of our citizens."

Mr Blinken said those challenges included preserving a free and open Indo Pacific, "where every nation, no matter how big, no matter how small, has the right to choose its own path".

Mr Blinken also suggested the US had reached agreement with Pacific Island leaders on a "declaration of partnership" which has been the subject of intense negotiations in the lead up to the summit.

Solomon Islands told other Pacific nations earlier this week it wouldn't sign on to the document, saying it needed more time to consider it and stressing there wasn't yet "consensus" among leaders.

But Mr Blinken seemed to suggest Solomon Islands was now on board, saying the leaders had "come together around a declaration of partnership between the US and the Pacific, one that shows that we have a shared vision for the future and a determination to build that future together.

"I'm very pleased that we have this today, that we've agreed on it," he said while holding up a document.

"And it will give us a roadmap for the work that we're doing in the future."

Asked by the ABC whether the agreement had the backing of Solomon Islands, State Department spokesman Ned Price would not provide any details.

"I will for now, so as not to spoil some of the surprise for tomorrow, just say that we've been in a position to make tremendous progress," he said.

"We've been gratified by the constructive conversations that we've had with Pacific Island attendees. And we'll have more to say on this tomorrow."

Mr Biden will host a formal dinner for Pacific leaders at the White House on Thursday night local time after holding the meeting.

Fiji's Prime Minister Frank Bainimarama said it was the most significant engagement between the US and Pacific Islands Forum, which he chairs, in a generation.

"The Pacific Islands Forum family welcomes this opportunity to set the USA towards becoming the true Pacific power it can become," he told the meeting with Mr Blinken.

"The fact that the Pacific leaders will be sharing a room with the US president and the entire machinery of the US government tells us how far we have come."