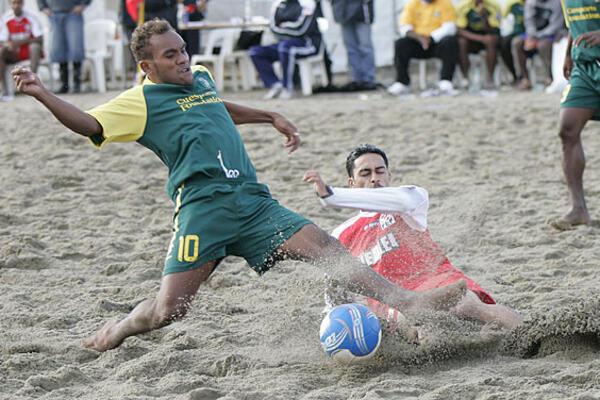 The tournament, which will take place in Aorai Tini Hau, Papeete, Tahiti, had been scheduled to take place last year but the OFC postponed it to allow for additional teams to enter.

Solomon Islands will be among the favourites to take Nations Cup glory, with four of their five appearances seeing them lift the trophy.

Hosts Tahiti could offer strong opposition though after finishing as runners-up in the 2017 FIFA Beach Soccer World Cup.

Despite navigating their group and the knock-out stage, Tahiti succumbed to Brazil in a 6-0 final defeat.

Today's opening fixtures will see a repeat of the 2013 final as the Solomon Islands take on New Caledonia.

In the last Nations Cup, Solomon Islands breezed to a 6-0 victory and will be hoping to repeat that feat in Tahiti.

Tahiti, who claimed the Nations Cup title in 2011, will also get their campaign started against Vanuatu.

Debutants Tonga will open their account on Tuesday (June 18) as the five countries face each other once in the group stage.

The top two teams will contest the final on Saturday (June 22) with the third and fourth ranked sides facing a play-off for the bronze medal.

The tournament winners will qualify for the 2019 FIFA Beach Soccer World Cup in Paraguay in November.