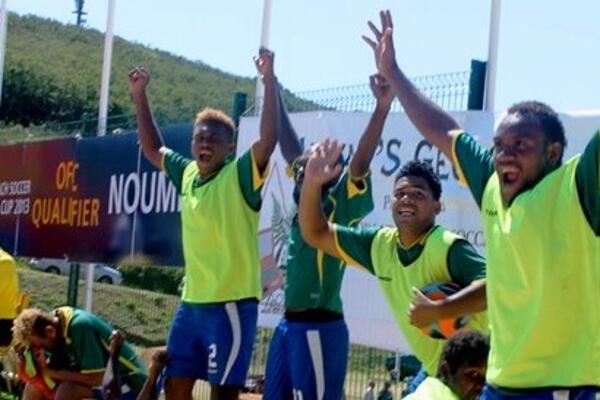 The Solomon Islands will now encounter Netherlands, El Salvador and Argentina in Group B at the FIFA Beach Soccer World Cup which is being held from 18-28 September in Papeete, Tahiti.
Source: OFC
Share
Tuesday, 03 September 2013 07:09 AM

The Solomon Islands saved their best for last as they booked their tickets to Tahiti 2013 with a glut of goals in the third period during today’s 6-0 victory over New Caledonia at the OFC Beach Soccer Championship 2013.

In the final day of action at the University of New Caledonia in Noumea, New Caledonia the two sides had everything to lose which resulted in a safe approach during the first period. New Caledonia had their chances, as did the Solomon Islanders, but neither seemed able to convert sending the two teams into the first break locked at 0-0.

The second period saw the Kouriane Dokunengo come out firing for the hosts as he looked to give his side the advantage. He was unlucky as the experience of Fred Hale constantly denied him the glory. The tides turned in the Solomon Islands’ favour when Dokunengo went down injured allowing Joe Luwi to capitalise on the man-advantage to slot home for the game’s opening goal.

New Caledonia rallied to deny the Bilikiki a further advantage but the damage was already done as the Solomon Islanders used the final period to secure their passage to the FIFA Beach Soccer World Cup Tahiti 2013.

Anthony Talo extended the lead five minutes into the final period with a shot that skimmed the outstretched gloves of New Caledonia goalkeeper and captain Ramon Djamali opening the floodgates to an assault on the Caledonian goal. James Naka slipped one under keeper Benjamin Foawy, who returned to the goal after receiving treatment for an injury. Luwi scored twice in quick succession to earn his hat-trick and cement his place as the tournament’s top goal scorer. With little left in the Caledonian reserve tanks, Robert Laua netted one last unanswered strike just 30 seconds from time to secure a 6-0 victory for his team.

Solomon Islands coach Gideon Omokirio says he is elated with the performance of his players today.

“This was our first time playing against New Caledonia so we didn’t know their strengths but after watching them yesterday and looking at their statistics we knew that if we used our strengths, which is speed and endurance, we could outlast them.

“We really wanted to go to this World Cup because it’s in our region, we know Tahiti, we know the weather, so we are ready to progress to the next stage.”

For New Caledonia coach Felix Tagawa it was hugely disappointing not being able to earn a second victory in front of their home crowd.

“We are disappointed because we prepared certain strategies and it was working. The goal in the second period destabilised us somewhat. They have a super goalkeeper who made some excellent saves,” Tagawa says.

“We forgot to be competitors at times and there were some errors. Sure, we need to mature as players and as a team, but we’ve made a lot of sacrifices to get here, our families are here, and so of course we are disappointed.

As well as earning their tickets to this month’s FIFA Beach Soccer World Cup in Tahiti, the Bilikiki also cleaned up in the individual awards with goalkeeper and captain Fred Hale picking up the Golden Gloves. Joe Luwi’s five goals earned him the Golden Boot and Samson Takayama is taking home the Golden Ball trophy.

The Solomon Islands will now encounter Netherlands, El Salvador and Argentina in Group B at the FIFA Beach Soccer World Cup which is being held from 18-28 September in Papeete, Tahiti.