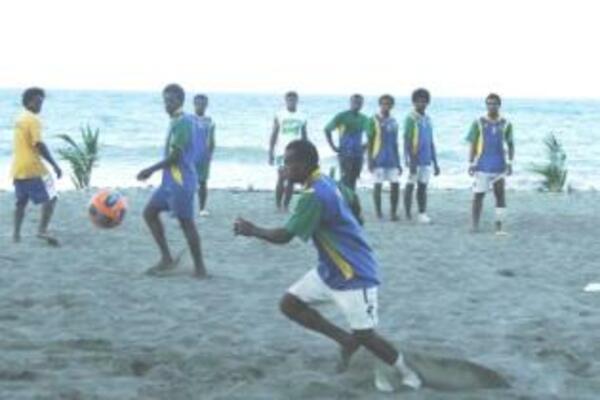 The Solomon Islands National Beach Soccer Team, Bilikiki, remains confident despite being placed in a tough pool for the 2009 FIFA Beach Soccer World Cup in Dubai later this year.

Bilikiki is grouped in Pool A alongside Portugal, Uruguay and hosts, United Arab Emirates (UAE). Portugal and Uruguay are former finalists and will be tough opposition for the minnows.

Speaking for the first time after the draws were announced, Bilikiki Coach, Henry Koto, acknowledged that Bilikiki's pool is a tough one. 'Nevertheless,' Koto said, 'the boys are confident that we will do well and beat our past record in the World Cup'. 'This is a World Cup and we expect it to be tough so the draw did not come as a shock' he added. Koto also restated that the aim of the team remains the same, and that is to progress to the second round.

Bilikiki will play their opening game against Uruguay in what will be their second meeting against the South Americans in a World Cup. Bilikiki previously met Uruguay in the 2006 Beach Soccer World Cup in Rio de Janeiro, Brazil, where the South American giants handed the island boys a 10 - 5 defeat. Uruguary later progressed to the finals where it lost to Brazil.

Team Manager, Rueben Oimae, backed his coach saying that the boys aim to win their opener against Uruguay. 'We know that it will not be easy but we know the result that we want and we will fight for it' Oimae said. He added that having international friendlies will further boost the team's ability to make it a hole in one for their first game.

Solomon Islands has played against Portugal in all of its campaigns in the World Cup so far. The former World Champions have an excellent record against Bilikiki but the islands boys hope to turn the tables against the Europeans this time round.

Henry Koto says that since this is the fourth time that they will meet Portugal they now have a fair idea about their style of play and weaknesses that Solomon Islands can capitalise on. This time it may be fourth time lucky, says the smiling Bilikiki coach.

Portugal boasts one of the best Beach Soccer players to have ever graced the sand in the form of Madjer. Madjer won the FIFA Beach Soccer World Cup Player of the Tournament award in 2005 and 2006.

One of the strengths of Bilikiki, according to coach, Koto, is the experience of the players in the team. For Gideon Omokirio, James Naka, Eddie Ngaitini and Fred Hale this will be the fourth time that they will play in a Beach Soccer World Cup. Koto said that it is this experience combined with the aggressive style of the younger players that will take us home.

Some of the new players in the Bilikiki team are already making ripples in the beach side code in just their first appearances. Robert Laua impressed spectators and even the team management with his agility and speed on the sand in the Qualifiers in Tahiti last month. 'Robert is new but he is very good, he is quick footed and also quick to recover for defence' Henry Koto said. Robert Laua was already a local household name in Futsal when he impressed National Beach Soccer selectors with his performance in the Honiara Beach Soccer League last year.

Bilikiki's second match will be against hosts United Arab Emirates. They will need a win against both Uruguay and UAE to secure a berth in the second round.