Big Plans Ahead for Solomon Airlines 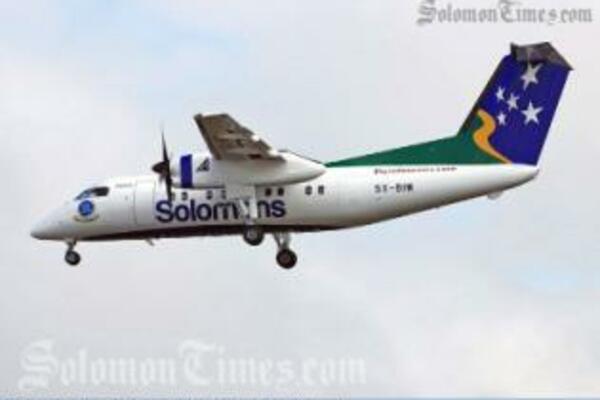 The arrival of Solomon Airline's own Dash 8 marked a significant event in the Airline's history.
Source: STO Archives
Share
Monday, 17 December 2012 09:08 AM

Only three events this year have managed to bridge Solomon Islands divisive politics, bringing together the Prime Minister and the Leader of the Opposition.

First up was the Oceania Football Confederation's Nations Cup in June; then the Festival of Pacific Arts in July; and in September, the visit by Prince William and his wife Kate.

Now a fourth event can be added to that list- the arrival in November of Solomon Airlines' newly acquired SB$40 million Dash 8 aircraft.

The arrival was timed to coincide with the airline's 50th anniversary. And it was reason enough for lawmakers to suspend parliament and be on hand for the plane's arrival.

To the surprise of onlookers Prime Minister Gordon Darcy Lilo and Leader of Opposition, Dr Dereki Sikua stood amicably shoulder to shoulder on the tarmac in front of the aircraft for photo opportunities despite a vicious war of words that had been raging between them over the past weeks.

While the aircraft's arrival is now turning heads, it has been months of backbreaking work to get the Dash 8 to Honiara.

For Solomon Airlines, the purchase of the aircraft dubbed the Queen of the Domestic Skies is the national carrier's most important acquisition in its 50-year history.
The Dash 8 joins the airline's fleet of two Islanders, two Twin Otters and an Airbus 320 on dry lease from Strategic Air.

Its arrival was the icing on the cake for the national carrier, that started its roots in 1962 as Megapode Airways.

In November, the airline marked half a century of service with the opening of its new multi-million dollar office complex at Honiara Airport.

The new environmentally friendly headquarters is aimed at reducing the airline's carbon footprint.

The opening of the office complex was only a teaser for the arrival of the Dash 8 purchased from Olympic Airways of Greece through a financing agreement with the Bank of South Pacific.

Solomon Airlines chairman, Bill Tyson says the airline will pay off the cost of the aircraft in five years.

"The Dash 8 is the right choice for Solomon Islands. We looked at a number of different aircrafts but the Dash 8 suits our airstrips. Plus, it's a very efficient aircraft and we will make savings by running our own Dash 8 service."

For the past three years, Solomon Airlines had been leasing a Dash 8 from Airlines PNG for its domestic service, but in the past 12 months the lease charges had tripled, making it quite an expensive affair.

In addition, Tyson said there was an expectation from Solomon Islanders for the same level of service that they received whilst on the leased Dash 8.

"We found that our customers were not willing to fly on the Twin Otters anymore. When the PNG leased aircraft went in for servicing, customers preferred to wait until the plane was running again, before they would fly."

The new Dash 8 will service the airline's domestic routes to Auki, Gizo, Munda, Seghe, Kirakira and Lata. For the airline to utilise the Dash 8, the board's deputy Chairman and Governor of the Central Bank, Denton Rarawa says the government has to match the airline's investment by upgrading airstrips and airports around the country.

"Not only do the airstrips have to be extended so that the Dash 8 can land, they also have to be all-weather-that means they need to be tarsealed. We can no longer use grass and coral airstrips."

The conditions of Solomon Islands airstrips have long been a thorn on the side of the national airline.

"It certainly makes us feel uneasy that today the airport can be open and tomorrow it can be closed because of weather reasons-be it potholes or runway problems," says Gus Kraus, the airline's General Manager Operations and Commercial Service.

It's a situation which Kraus is quick to point out will benefit everyone.

The long-term strategy for the airline is to add a second Dash 8 to its routes, but that is someway off yet and will be determined by how fast the government can upgrade airstrips across the country.

In celebrating the arrival of the Dash 8, Tyson said the plane's arrival means Solomon Islands pilots will also be able to progressively develop their skills.
Under the lease with Airlines PNG, Solomon Airlines pilots were not allowed to captain the aircraft.


On the international front, November too was a big month for the national carrier with its new Honiara/Port Vila/Nadi/Port Vila/Honiara service.
The Saturday service and its return on Sunday is part of Solomon Airlines' expansion into the region.

It's an expansion based on partnerships, alliances and opportunity aimed at developing Honiara into a travel hub, linking up countries across the region.
Next on the airline's list are plans for a codeshare arrangement with fellow Melanesian carrier, Air Niugini.

Kraus says talks have been ongoing for a number of years and with Solomon Islands' traditional ties with Papua New Guinea, it's only natural that the two national airlines should collaborate in the best interest of their customers.

"On their twice-weekly service, we would want 15 out of the 104 seats. Air Niugini has cited the Independent Consumer and Competition Commission (ICCC) as the main obstacle to a codesharing agreement for the Honiara to Port Moresby service."

"For whatever reasons, Air Niugini has implied that the ICCC is an issue for them but certainly with our Melanesian brotherhood, I don't see this as a major obstacle."
Solomon Airlines' international service, explains Tyson, is vital for the airline's future development."

"The current international service supports the domestic service which runs at a loss. Sure we will gain efficiencies through the use of Dash 8 but that will only overcome some of the losses. So it's very important that we have a good reliable international service. By having the Airbus on a dry lease, we are able to provide best days, best times and because of this, we can enjoy a very good market share on the international service. In the long-term, I believe the airline should be looking at other routes beyond Brisbane. This is only in our minds at the moment but how about Brisbane, Port Moresby and Singapore? I know we'd get enormous support out of PNG because they are encouraging us to look at these options."