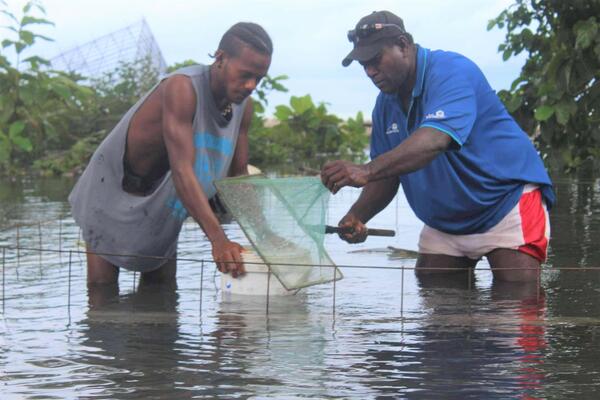 Maxwell Ham (R) trying to salvage whatever he could from his farm after the damage caused by the recent weather.
Source: STO
By Jimmy Nolan
Share
Wednesday, 10 February 2021 10:38 AM

A local Tilapia farm in Aruligo North West Guadalcanal has lost more than 7,000 tilapias (Mozambique species) when his hatchery pool was inundated by king tides associated with the recent bad weather.

The owner of the tilapia farm, Mr Maxwell Ham, says it was a sad day for him, with all the hard work he has put into the farm gone in a matter of days. He says his dream of breeding and farming tilapia was washed away, quite literally, when the king tides broke through the small sand dunes, he had set up to prevent damage.

“I thought I had done enough to prevent this, but the king tides were high, and it came through the small stream, damaging my hatchery site.

“I was very upset and although you can try and prepare but disasters like this does happen. When it washed away all I can say is that I have not only lost money but also all the time and energy when I was setting up the hatchery,” Mr Ham said while trying to save whatever he could from his farm.

“I was looking forward to my first harvest which should have been in September, now the only thing I will have to deal with is the cost of repair.”

Mr Ham says that this would be the second time this has happened, the first was during the Tropical Cyclone Harold flooding last year where he lost similar amounts of tilapia to flooding caused by the torrential downpour.

At its peak Mr Ham said his farm had well over 30 thousand tilapias, which earned him a decent income. He says despite this massive set back he will continue to work hard and not give up – he says dreams comes with challenges and he will take this as a challenge to build his farm better.

Mozambique tilapia is a non-native fish to the Solomon Islands that is currently cultured at a low scale within the country. Farming of this particular strain of tilapia is done mainly in Malaita and Guadalcanal.