"Be Noisy As Possible on Climate Change," UN Secretary General's Message to Youths 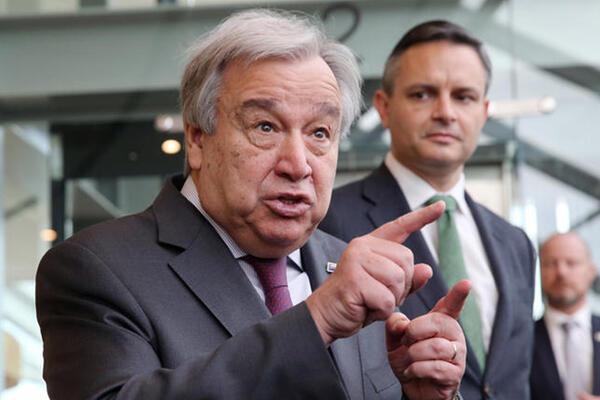 UN Secretary-General António Guterres with Climate Change Minister James Shaw ...“It is absolutely crucial to have the leadership of the youth."
Source: Michael Bradley/RNZ
By Michael Andrew, Asia Pacific Report
Share
Tuesday, 14 May 2019 08:17 AM

Speaking at Auckland University of Technology’s southern campus in Manukau yesterday as part of a two-day tour of New Zealand and the Pacific, Guterres said governments have not been showing the political will to address climate change.

He described this as the defining issue of our time – “It is the biggest threat to our lives and the life of the planet and we are not winning the battle.”

He added: “Things will start to change very quickly.

“It is absolutely crucial to have the leadership of the youth.”

The youth were well represented at the talk, with groups from three local high schools and many AUT students in attendance.

Introduced by the university’s Office for Pacific Advancement (OPA) strategic director Veronica Ng Lam, who welcomed him to South Auckland – “the centre of the universe”, Guterres also said fossil fuels were being subsidised by governments and that needed to stop.

“The IMF has calculated 7.2 trillion dollars spent in direct subsidies to fossil fuels or indirect negative consequences of those subsidies,” he said.

“It is totally unacceptable that taxpayer’s money is used to spread drought, to spread heat waves, to bleach corals and to make glaciers recede.

He also spoke about the role of the internet and its capacity to both help and harm society.

“It is essential to make sure that we transform the internet into an instrument for good and not an instrument to subvert the wellbeing of society.”

RNZ’s Indira Stewart then conducted an onstage interview in which she asked what needed to change for the voices of the Pacific to be heard in the climate change debate.

While Guterres could not provide a direct answer, he acknowledged that regions like the Pacific and Africa were experiencing the most adverse effects from climate change.

He said there was a common responsibility, especially of wealthy countries to reverse the destructive trends and that achieving carbon neutrality by 2050 was top priority.

Students were then invited to come forward and ask questions.

A student from Papatoetoe High School cited a recent IPCC climate report, which found that millions of species could be facing extinction as a result of climate change.

The student said that it might be too late to simply wait for the younger generations to come into power in order address climate change and save threatened species.

Guterres replied: “I’m not waiting for you to be in power, I’m waiting you to be as noisy as possible now. To mobilise your societies, your parents, your families, your friends and to put governments under pressure.”

AUT business student and Oceania Leadership Network member Christopher Tenisio then asked how the UN would deal with countries that were not fulfilling their commitment to the 2016 Paris Climate Change Accord.

After the session, Tenisio told Asia Pacific Report he was impressed with what the Secretary-General had said, but felt that the answers seemed rehearsed.

“He is a career politician after all. Just about every question was deflected back to the audience.”

However, he said it was a positive experience for the students to see how the United Nations operates.

“It’s good in a sense that they get to see how the system works.”