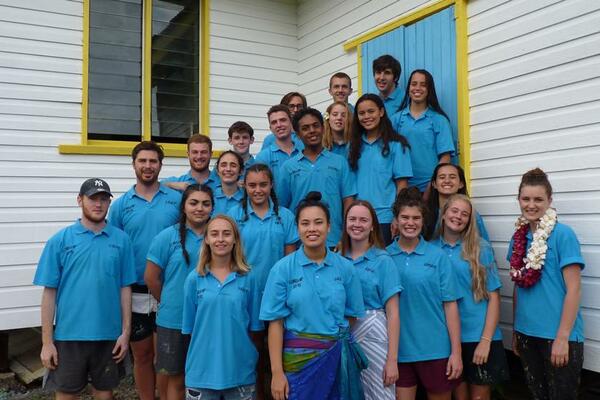 All 23 team members returned to Australia feeling incredibly blessed to be able to experience Solomon Islands culture and to make so many wonderful connections with the people they met.
Source: adventistreview.org
Share
Monday, 30 July 2018 07:35 AM

The team of 16 students and seven teachers traveled to the Marovo Lagoon as a Sonship Action Team to paint the exterior of the church building.

The Motusu Seventh-day Adventist Church sits on top of a peninsula and is the most visible building when approaching Batuna from either side. Dedicated on June 7, 1934, the church played an important role in the spread of Adventist beliefs throughout the Solomon Islands and Papua New Guinea.

“It was a real privilege to be trusted with this historic landmark,” said trip leader and BAC teacher Clinton Jackson. “It is humbling to think of the sacrifices made by all the people who originally built this church.”

“We received such friendly welcomes everywhere we went,” said college captain Ashlon Ghazali. “Everyone always seemed to be smiling and waving and greeting you. It was very hard to leave behind all the friends I made.”

The trip was particularly meaningful for Ghazali, whose great-grandparents, Frank and Ida Aveling, managed the sawmill at Batuna after the close of World War II.

All 23 team members returned to Australia feeling incredibly blessed to be able to experience Solomon Islands culture and to make so many wonderful connections with the people they met, Jackson said. Visiting volunteers developed a special connection with Batuna Adventist Vocational School deputy principal and chaplain John Pikacha, who took one of the team’s nightly worships.

“The surrounding communities highly appreciated the team's mission; the physical appearance of the church was the talk of the town for days after the team left, even up to now,” said Pikacha, describing the impact of the team. “The missionary spirit the team possessed and their willingness to help out was an expected blessing for our church and the community at large, and the team left behind a legacy that will never be eradicated in the memory of our people.”