Bastion Talk (of the Town) 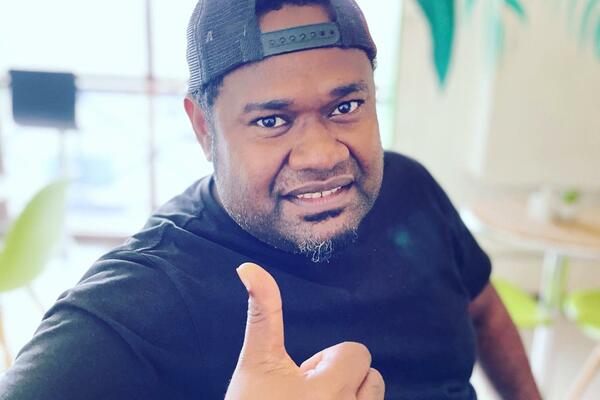 His recent video posting on social media has become the talk of the town, not so much about what he said, but because an official complaint was made by a Member of Parliament (MP) against Trevor, prompting the police to respond.
Source: Facebook
By Samson Sade
Share
Friday, 20 August 2021 12:40 PM

Bastion Talk is a social media advocacy platform hosted by Israel Trevor Sibia, seeking to voice the frustrations of the people of Guadalcanal and Solomon Islanders generally.

Trevor is an unassuming guy, seems cheerful in most of his postings, and talks passionately about everyday issues that Solomon Islanders talk and complain about. The lack of development in the country, the rampant corruption, the lack of real opportunities for locals, and how leaders seem to turn a blind eye on the everyday struggles of ordinary people.

His recent video posting on social media has become the talk of the town, not so much about what he said, but because an official complaint was made by a Member of Parliament (MP) against Trevor, prompting the police to respond.

“The Police Response Team (PRT) was sent to my house after a complaint was made by a Member of Parliament,” Trevor wrote on his Facebook page. “They told my wife that they were after my dad and his three sons.”

Trevor said his wife probed further and was told that an MP was not happy with a video that was posted on Facebook.

“So, my wife said, oh are we a communist country now?! in which none of the officers said a thing.”

It is not clear what the nature of the complaint to the police was, but other media outlets are reporting that the complainant stated that the video was racist and inflammatory.

Just over 3,000 people viewed the video on YouTube, and perhaps more on Facebook since the story broke. The video that Trevor posted was of himself, talking to his YouTube subscribers and friends on Facebook, raising issues that were of concern to him.

The police issued a statement regarding the incident, stating that the police are not politically influenced by politicians, and do not give in to orders or instructions from them.

“RSIPF as an organization is an independent body and has nothing to do with politics. I would like to make it very clear that Guadalcanal Police responded independently to a report received to formally invite two parties in Central Guadalcanal to the Henderson Police Station for a peaceful dialogue regarding a social media post,” said Supervising Provincial Police Commander (PPC), Guadalcanal Province, Superintendent Edwin Sevoa.

“Police did not intend to make any arrest on any of the family members of the person as claimed on social media. Instead, both the brother and father of the person wilfully called in at Henderson Police following the invite made by our officers to ensure both parties attend and resolve their differences accordingly.”

Superintendent Sevoa urged social media users to refrain from publishing any controversial or potentially inflammatory and unsubstantiated innuendos to politicize or jeopardize the work of police officers.

A fair call, but social media is here to stay - it is a tool that could be used for good, or for evil. Social media does not have a filtering system, it is raw and can be hurtful, or flattering.

The independence of the police will not be judged based on what they say, but more on what they do – when people feel that their fundamental rights are being infringed upon than there will be some disagreements.