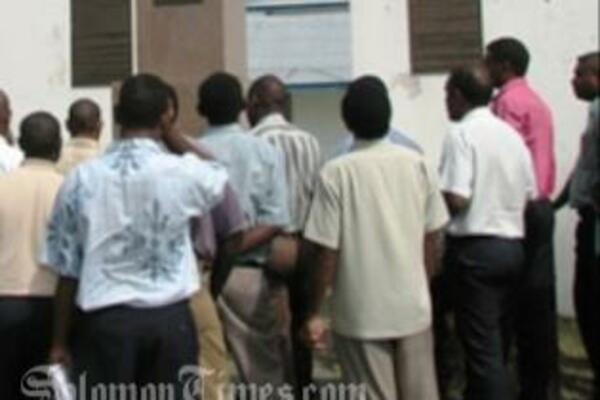 Mr Avui says SIPEU has not tendered a proper notice for todays planned strike action, and it would be illegal for them to rely on the last strike notice they issued.
Source: STO Archives
Share
Wednesday, 18 November 2009 09:17 AM

Permanent Secretary for the Ministry of Public Service, Ishmael Avui, has appealed to government workers to refrain from taking part in todays strike action as it would be illegal for public officers to go on strike without proper notice.

Mr Avui says all Ministries are being advised to record the attendance of all their employees today to account for officers who may want to take part in the strike action by the public employees union, SIPEU.

He says SIPEU has not tendered a proper notice for todays planned strike action, and it would be illegal for them to rely on the last strike notice they issued.

However, in an interview with One News last night, General Secretary of the SIPEU Paul Belande said that they have consulted with their lawyers and have been advised to go ahead with the strike.

"Enough is enough, we have been patient with the government for too long," said Mr Belande. The General Secretary said that members of the SIPEU in the provinces have been advised to stop work today.

Meanwhile, Mr Avui says the Trade Dispute Panel has given an award on the SIPEU log of claims. But he says the Minister of Commerce is yet to make a decision and sign the award.