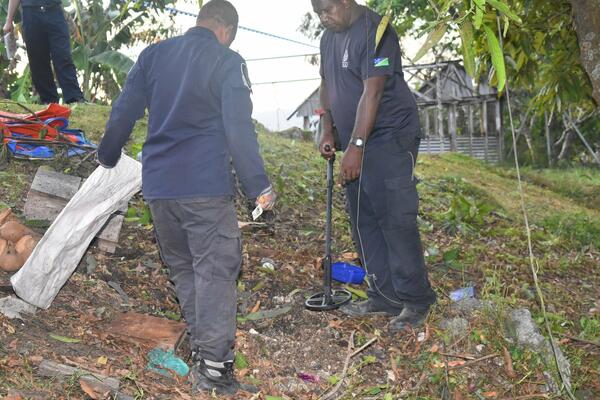 The RSIPF Forensic and Explosive Ordnance Disposal (EOD) team have since identified the bomb that caused the blast yesterday.
Source: Supplied
By Georgina Kekea
Share
Monday, 10 May 2021 08:31 AM

An aviation engineer at the Ministry of Communication and Aviation (MCA) was the victim of the tragic bomb blast in Honiara on Sunday 9th May.

The incident occurred on the property of a private residence where a group of church youths were preparing food outdoors for a fundraising event.

The late Raziv Hilly who was also a youth leader was said to be a very instrumental staff in the expansion of the Honiara International Terminal Project as he was the Acting Chief Operating Officer as well as Property Manager in the MCA at the time of his passing.

Solomon Star reported that Director Aviation Policy, Trevor Veo says the tragedy is a huge loss for the ministry and the government.

In his role as engineer, the late Hilly was said to oversee the government projects for both domestic and international airports and played a crucial role in the government’s airport projects. He was also an avid christian youth leader who spent most of his spare time with the youths and the church.

The local police confirmed yesterday that there were four casualties of the bomb incident. Three of the casualties are currently being treated at the national referral hospital for injuries. Two with serious injuries and one with minor injuries.

The bomb blast was a shock for Honiara residents with many questioning on social media the safety of their homes. Until now, it is still unknown the quantities of explosives remnants left behind from the combat between Japan and the United States during World War Two.

Sporadic clearance was said to take place after the war till now. From 2011 to 2019, the Department of State’s Office of Weapons Removal and Abatement has invested over $5.1 million for the development of a national EOD capacity in the Solomon Islands and for the support for removal of unexploded ordnance (UXO).

The RSIPF Forensic and Explosive Ordnance Disposal (EOD) team have since identified the bomb that caused the blast yesterday.