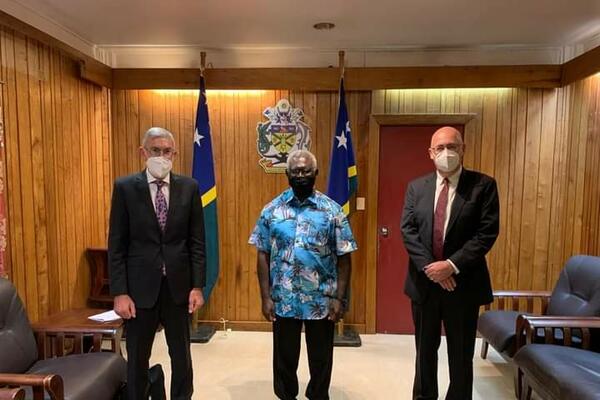 McDonald thanked Sogavare for his warm welcome. He extended Australia’s condolences to all those families in Solomon Islands who have lost loved ones during the covid-19 outbreak.
Source: Supplied
Share
Wednesday, 09 March 2022 19:19 PM

Australia’s Head of the Pacific in Department of Foreign Affairs and Trade has visited the Solomon Islands to reaffirm the two countries’ ongoing partnership.

Prime Minister Manasseh Sogavare welcomed the Head of the Office of the Pacific in Australia’s Department of Foreign Affairs and Trade, Ewen McDonald, back to Honiara, 1-3 March 2022 to discuss the ongoing strong partnership between Solomon Islands and Australia, including in responding to covid-19.

“I thank Australia for its continuous support to help Solomon Islands address COVID-19, and in responding so quickly to restore law, order and security following the November 2021 civil unrest,” Sogavare said.

“During our talks, we discussed how Australia can continue to best deliver assistance during this challenging time, including through the ongoing support of Australia through the Solomons International Assistance Force (SIAF),” he added.

Highlighting just one example of the close partnership with Australia, Sogavare said the Australian Pacific Labour Mobility Schemes provide a valuable opportunity for Solomon Island people to earn an income and learn new skills, including in agriculture, which they can apply when they return home”.

McDonald thanked Sogavare for his warm welcome. He extended Australia’s condolences to all those families in Solomon Islands who have lost loved ones during the covid-19 outbreak.

“Australia has a strong commitment to the Pacific Family. Australia and Solomon Islands are not just neighbours, but family who stick together and support each other,” he said.

Prime Minister Sogavare expressed his sympathy and support to the people of Australia in the face of widespread flooding along the east coast of Australia.

During their meeting, McDonald outlined Australia’s position on Russia’s unprovoked and unjustified invasion of Ukraine.

Subsequently, both Australia and Solomon Islands voted for a United Nation’s General Assembly resolution deploring Russia’s invasion and calling for the immediate withdrawal of Russian forces from Ukraine.

In voting for the resolution, Solomon Islands highlighted its grave concern about the invasion and called for dialogue to reach a peaceful diplomatic solution.

McDonald also met with the Minister for Finance and Treasury, Harry Kuma, to discuss the challenging economic and financial situation facing Solomon Islands as a result of the November 2021 civil unrest and the COVID-19 pandemic.

The roundtable canvassed ongoing cooperation in the areas of policing and national security, health, education, finance and infrastructure.

McDonald subsequently attended a roundtable with development partners convened by PS Dentana, and attended by representatives of New Zealand, Japan, the United Kingdom, the United States, the ADB, the World Bank and UNDP.

He underlined Australia’s strong commitment to continue supporting Solomon Islands to combat the virus, including via the provision of medical supplies and the deployment of medical experts such as two experts from the Doherty Institute in Melbourne who are currently working at the molecular laboratory at the National Referral Hospital.

At the invitation of SPM Rodgers, in his capacity as Chair of the 2023 Pacific Games Organising Committee, McDonald toured several of the venues for the Games, including the futsal hall.

He was delighted to meet numerous Australians involved in preparations for the games, as employees or volunteers, as well as Australian Award Alumni who are working on the construction projects.

The Australian delegation abided by all COVID-19 protocols agreed with the Solomon Islands Government, including pre-departure and daily COVID-19 testing, mask wearing and strict social distancing.