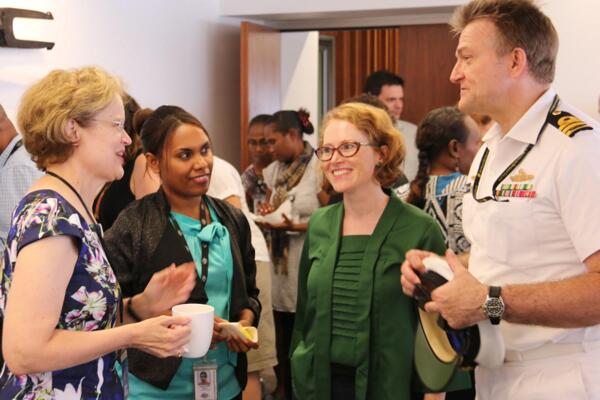 Secretary of Australia’s Department of Foreign Affairs and Trade, Ms Frances Adamson, will visit Honiara on 23 and 24 February to meet with Prime Minister Manasseh Sogavare and Foreign Minister Milner Tozaka to discuss Solomon Islands transition from RAMSI and Australia’s ongoing commitment to the country’s security.

As one of Australia’s closest neighbours and nearest friends, Australia is committed to the ongoing security and growing prosperity of Solomon Islands. Ms Adamson will also meet with Australia’s development partners who we work with to deliver our third largest aid program.

This financial year Australia’s development assistance to Solomon Islands is worth around AUD 162 million - nearly 1 billion Solomon Island dollars. Ms Adamson will visit the Solomon Islands National University where the Australian Government support is training the next generation of leaders to pursue a more prosperous future. Australia’s contribution through its Skills for Economic Growth program will total AUD 71 million between 2015 and 2019.

Australia is also contributing to Solomon Islands long-term stability, economic growth and human development through investing in vital infrastructure. Australia has so far invested over SBD 180 million into bridges, wharves and roads across the country to help Solomon Islanders access markets, health care and other government services.

Australia’s infrastructure investment will also support the restoration of two bridges in East Guadalcanal to assist with the Guadalcanal Plains Palm Oil Ltd (GPPOL) plantation to expand, creating new jobs and opportunities for Solomon Islanders. Ms Adamson will meet with GPPOL during the visit to discuss its expansion.

Ms Adamson will also meet with the Pacific Islands Forum Fisheries Agency (FFA) who in conjunction with Australia’s Patrol Boat Program work to protect Solomon Islands access to fishing grounds which are a vital part of the country’s growing economy and the livelihoods of its people.

Ms Adamson commenced as Australia’s first female Foreign Affairs and Trade Secretary in August 2016. She and was previously Australia’s Ambassador to China and is a former International Adviser to Australian Prime Minister the Hon Malcolm Turnbull MP.