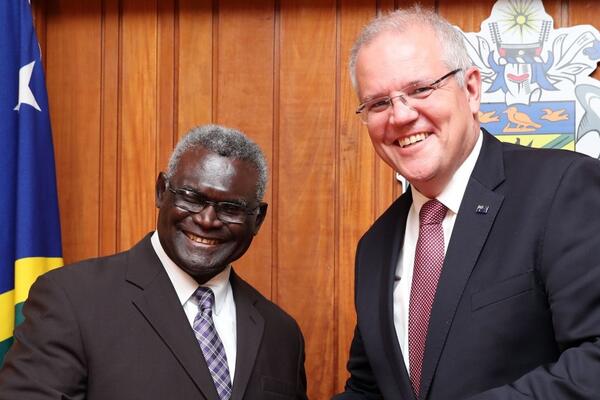 "It's a partnership with our family in the Pacific and the rest of the world looks on Australia as providing that support to developing countries in our own region and that is specifically in relation to the Pacific countries," Mr Morrison said.
Source: scmp
Share
Thursday, 20 August 2020 13:19 PM

Australia's Prime Minister Scott Morrison has promised to distribute a COVID-19 vaccine to the Pacific and some South-East Asian countries if Australia develops a supply of working drugs.

The Australian Government struck an agreement with UK-based drug company AstraZeneca to locally produce a vaccine which is currently being trialled at Oxford University.

If the trial is successful, and the Government is able to ramp up local production of the drug, then it has promised to deliver the vaccine for free to all Australians.

Mr Morrison said Australia also planned to use its aid program to "roll this sort of support out to our Pacific neighbours."

"To be honest, in the region, that's expected," Mr Morrison said.

"It's a partnership with our family in the Pacific and the rest of the world looks on Australia as providing that support to developing countries in our own region and that is specifically in relation to the Pacific countries.

Mr Morrison also said he had discussed the vaccine with Indonesia's leader Joko Widodo, and flagged that Australia might also roll out a vaccine to South-East Asian countries interested in receiving it.

The Health Minister Greg Hunt said the Government could use the facilities of biotech giant CSL to manufacture the vaccine both for Australia and the region.

"And we can produce for Australia, for New Zealand, for our South Pacific region to help others."

Federal Government sources said it was too early to estimate the cost of the roll-out, and that it would take time to hold discussions with South-East Asian nations about whether they'd be interested in receiving a vaccine from Australia.

Aid groups have welcomed the Prime Minister's declaration but are urging the Coalition to increase the aid spending to fund a vaccine rollout, rather than drawing from the existing development budget.

"Australia's development cooperation program has built the connections to help roll out this vaccine to the region. But we have reached the end of repurposing the aid budget," Marc Purcell, CEO of the Australian Council for International Development, said.

"In order to do this effectively, new resources are required. Otherwise, we risk running down other critical areas of development cooperation and compromising existing relationships."

The Government is increasingly anxious about the impact of the coronavirus pandemic on Pacific Island nations.

So far the large majority of countries in the region — including Tonga, Samoa, Solomon Islands, Vanuatu and Kiribati — have remained free of coronavirus.
But the virus has been steadily gaining ground in Papua New Guinea, which has now recorded 359 confirmed cases, with 12 new ones reported in the past 24 hours.

The PNG National Pandemic Control Centre says all of the new cases are from the large Ok Tedi copper and gold mine, and are all asymptomatic.

The World Health Organization fears the real figure in PNG might be much higher than that because testing levels in the country remain so low.

The pandemic has also taken a heavy economic toll on several Pacific Island countries, particularly those with large tourism industries like Vanuatu and Fiji.

The Australian Government has already repurposed hundreds of millions of dollars in the aid budget to help Pacific nations deal with the fallout and has flagged that more sweeping changes are to come.