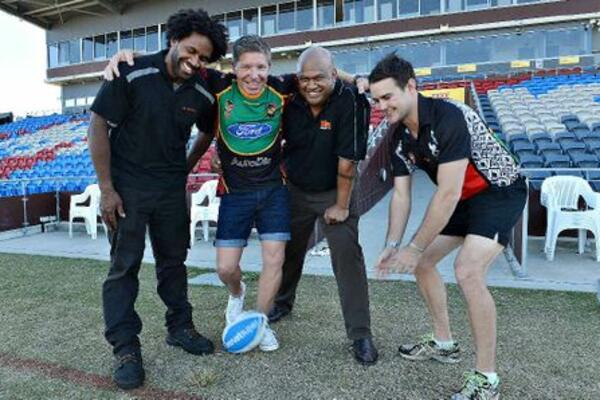 Bobongie, who traces his ancestry back to his great-great-grandmother Grace Fatnowna who came to Australia from Lau Lagoon, Malaita, will captain the Solomon Islands team in a clash with Vanuatu on day after the NRL grand final

"This is a great opportunity for me and I'll take it with both hands," he said.

"Every year I've had a chance to play in this game, but for some reason or other I haven't been able to.

"One year I was undergoing a shoulder reconstruction and last year it was rained out."

The match will feature some talented players, with Warriors centre Dane Nielsen lining up for the Solomons along with Mackay's Ewan Tass and Zac Williams.

The Storm's Justin O'Neill and Warriors player Alehana Mara will line up for Vanuatu, along with a mix of players based in Australia and from the island.

Experienced Mackay coach Joe Fatnowna is also taking on a management role with the Solomons team.

Mackay Souths coach David Simpson is coaching Vanuatu, and said although the sport was in its infancy on the islands, many of the players had exceptional sporting ability.

"League was only established in Vanuatu in 2011," he said. "A lot of the players have rugby experience, so there is a lot of untapped talent, that is the exciting thing."

The match is being co-ordinated by Dane Campbell, who helped pioneer rugby league in Vanuatu and brought a team to Australia earlier this year to mark the 150th anniversary of the arrival of islanders.

In a similar format to the NRL All Stars game, curtain-raisers will be held between men's and women's teams representing Vanuatu-South Seas and Indigenous cultures.