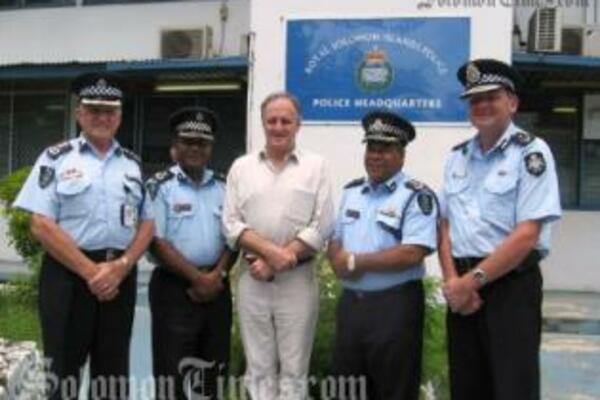 During his visit, Mr Debus held useful discussions with the Prime Minister and Ministers for Police and Finance, the Attorney-General, Public Solicitor, National Law Reform Commission and the Leader of the Opposition. Discussions focussed on cooperation between Australia and Solomon Islands in the legal, justice, customs and policing sectors. The delegation also had a useful meeting with civil society groups working to prevent violence against women and children.

Mr Debus was pleased to hear about the progress in setting up the Truth and Reconciliation Commission (TRC) from TRC Deputy Executive Secretary, David Tuhanuku, who explained the TRC's functions and mandate. Australia last week announced it would contribute $2.5 million to the TRC.

A visit to Isabel province gave Mr Debus and his delegation the opportunity to meet Solomon Islanders living in rural areas and observe their customs and culture first hand. Mr Debus said his visit to Isabel was a highlight of the trip. "It was such a pleasure to visit Buala, to meet Premier Ruben Dotho and to talk to the people there about their lives, their communities and their customs. It is difficult to get that experience when you only visit the capital city. I am happy to be able to take back this experience to Australia and share with my fellow Cabinet ministers the understanding I have gained about Solomon Islanders living in rural areas."

Mr Debus's wife, Ms Leela Smith, visited a number of Australian aid projects around Honiara. She met with pastors and counsellors at the Lighthouse Project, a rehabilitation resource centre in Borderline funded by the Community Sector Program. Ms Smith visited the Botanical Gardens and was impressed by the hard work of the Honiara Beautification Committee. She also met counsellors at the Family Support Centre and heard about their experience working to combat domestic violence.

This was the second visit by an Australian Cabinet Minister to Solomon Islands in the space of a week, after Trade Minister the Hon Simon Crean MP visited Honiara from 2-3 April. Mr Crean was accompanied by Parliamentary Secretary for International Development Assistance, the Hon Bob McMullan MP. These visits illustrate the great importance Australia places on its relationship with Solomon Islands and the excellent rapport that has been built between the two governments.