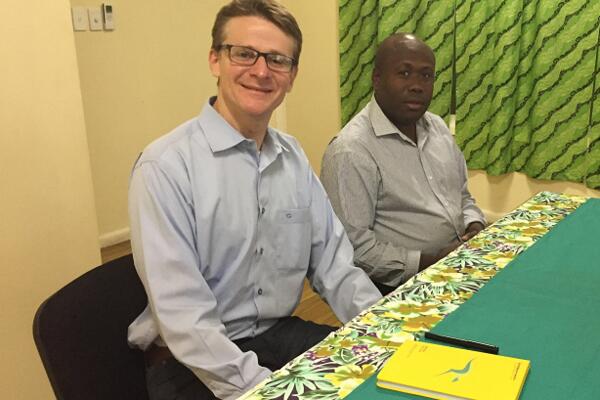 The High Commissioner briefed the Premier on Australia’s commitment to continue to support security and stability in Solomon Islands after RAMSI departs in June 2017.
Source: Photo supplied
Share
Wednesday, 15 February 2017 08:31 AM

"As Australia’s new High Commissioner, it’s a top priority for me to sit down with Premier Veke, the Deputy Premier, Ministers and Provincial Executive members to learn more about developments in Guadalcanal Province," said the High Commissioner.

During the meeting, the High Commissioner heard how the Provincial Government of Guadalcanal is working with the Solomon Islands Government and Donor Partners to overcome challenges and to bring development to the remote communities of the province.

"Australia is proud to be supporting the Guadalcanal Provincial Government to develop various sectors including health, infrastructure and education, to help improve the lives of its people."

The High Commissioner briefed the Premier on Australia’s commitment to continue to support security and stability in Solomon Islands after RAMSI departs in June 2017.

"We are also in discussions with the Solomon Islands Government on a new treaty, which would enable us to provide operational security assistance in the event of a major crisis".

Discussions also focussed on economic and infrastructure development in the province, including the Tina River Hydro-electricity Project and the expansion of Guadalcanal Province Palm Oil Limited, which will generate more jobs for local people.

With Australia’s support, the National Transport Fund is currently investing almost SBD 50 million in Guadalcanal’s roads, bridges and wharves – covering 120km of Guadalcanal’s roads. Major works funded by Australia, through the National Transport Fund include rehabilitation and maintenance, construction of bridges, and implementing climate change adaptation on roads of the province.

The Solomon Islands Rural Development Program, funded by Australia, has been operating in Guadalcanal since 2008 to support agricultural extension and priority village infrastructure and services.

"I look forward to seeing more of this beautiful province over the course of my posting here in the Solomon Islands," the High Commissioner said.