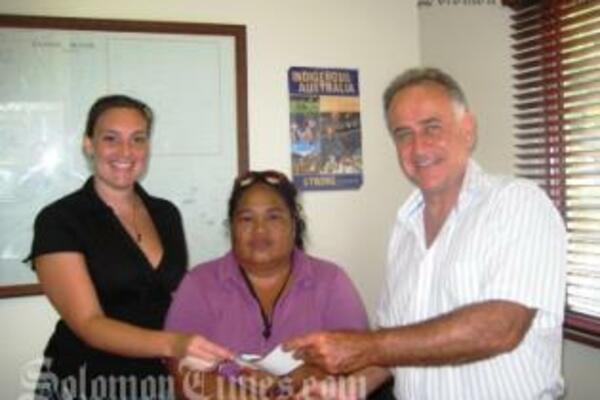 Mr Ingruber presented a cheque for more than SBD44,000 to SIPA United Sports and Social Club Secretary, Ms Eva Pongi, in support of the SIPA Christmas Tournament, to be held December 2009 for sports clubs from Rennell and Bellona.

SIPA United was first established in 1976 and now comprises 30 volunteers, working with 500-600 youths in Rennell and Bellona Province. The club applied for funding for a "Breaking Barriers through Sport" project, to organise and facilitate soccer and netball programs in Rennell and Bellona, with a strong focus on women's sports development and increasing youth participation in sport.

The SIPA United Christmas tournaments will run for two weeks in December, involving nine sports clubs from Rennell and eight clubs from Bellona. The Tournament will start with a curtain raising women's soccer game.

Mr Ingruber said "the Australian High Commission is pleased to support sports development in Solomon Islands and increasing opportunities for Solomon Islands children living in remote areas to be fit and healthy and actively engaged in organised sporting activities."