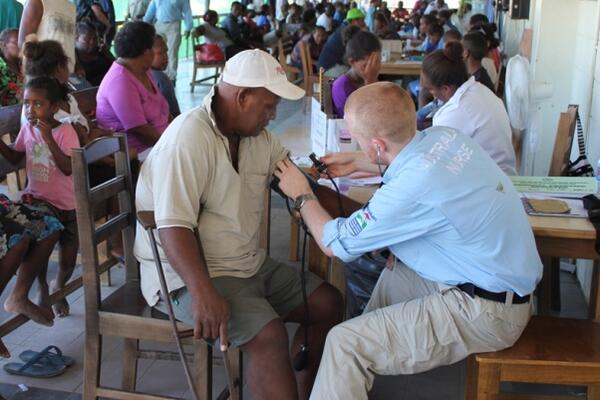 Australia’s High Commissioner to Solomon Islands, Andrew Byrne says the team will be based at the National Referral Hospital and will help local staff respond to an influx of patients.
Source: Australian High Commission
Share
Wednesday, 23 April 2014 08:00 AM

Australia continues to stand with Solomon Islands in responding to the flood crisis.

The Australian Government is sending two Australian doctors, as part of a New Zealand-led medical team, to Solomon Islands to help with post-floods relief efforts.

Australia’s High Commissioner to Solomon Islands, Andrew Byrne says the team will be based at the National Referral Hospital and will help local staff respond to an influx of patients.

“The team will work with Ministry of Health and Medical Services staff to provide an effective response to the expected increase in water-borne diseases following the floods.”

“Australia led a medical response team in response to the dengue outbreak last year, helping to treat patients, manage workloads and provide relief for exhausted local staff. This team will continue the great work and relationships built during that time.”

The team will start work on Thursday 16 April. Mr Byrne has also announced that more than 28,000 flood affected people in Honiara and East and West Guadalcanal will receive support for livelihoods, education, water and hygiene through a AUD1.5 million (around SBD10 million) partnership with three NGOs - World Vision
Australia, Save the Children Australia and Oxfam Australia.

Mr Byrne says that Australia continues to help with the immediate needs of people affected by the floods and early recovery efforts.

“Four Royal Australian Air Force aircraft have delivered thousands of hygiene kits, water containers, blankets and mosquito nets which have been distributed in coordination with the National Disaster Management Office and NGOs.”

“Australia has also provided 40 water tanks to evacuation centres and funded mosquito sprays to reduce the risk of disease. Australia’s civil-military engineering team and the Regional Assistance Mission to Solomon Islands also continue to assist efforts on the ground.”

Mr Byrne says that Australia will continue working closely with the Solomon Islands
Government in coming weeks to assess what further assistance may be required.