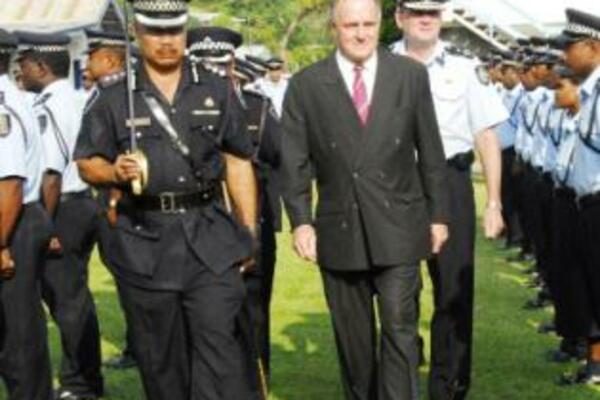 Representatives of RAMSI this week told a high level delegation representing the Australian Government and the Australian Federal Police that the regional partnership to restore peace and prosperity to Solomon Islands was making steady progress.

Mr Debus said he was impressed by the great support for RAMSI that had been apparent during his short visit to Solomon Islands and praised the mission's approach.

"Seeing the mission in action and meeting people from both the Solomon Islands and from across the Pacific region who are committed to a better, brighter future for Solomon Islands is a reminder that RAMSI is a regional, not just an Australian endeavour," Mr Debus said.

A highlight of the Minister's visit was his viewing of the Royal Solomon Islands Police Force Morning Parade at Rove today, where he received warm "happy welcome" cheers from RSIPF officers and their RAMSI PPF Advisors.

Addressing the assembled RSIPF officers, Mr Debus said he was very impressed by the high standard of presentation of all members on parade and thanked the Acting Commissioner for the opportunity to be his special guest and review the men and women under his command.

"The RSIPF has undergone a radical transformation since the arrival of the RAMSI PPF in 2003," he said. "I am encouraged by the partnership between the RSIPF and the PPF and the results that partnership is delivering for the people of the Solomon Islands," he said.

Minister Debus said his meetings "re-emphasised the vital commitment we have made through RAMSI to securing the ongoing stability and development of the Solomon Islands".

"I was deeply impressed by the levels of commitment and energy demonstrated by RAMSI PPF members and my meeting with the RSIPF Acting Commissioner and his team reflected the direct benefits the RAMSI PPF is bringing to the country as a whole," he said.

AFP Assistant Commissioner Frank Prendergast said he appreciated the efforts of the Solomon Islands Prime Minister, Government Ministers, RSIPF Executive, RAMSI Special Coordinator's Office and PPF Executive in providing comprehensive briefings to himself and the Minister during their trip.

"We are confident of the growing strength of the partnership between RAMSI PPF and the RSIPF," Mr Prendergast said.

"This has been a highly valuable experience to learn more about the challenges the Solomon Islands people face and further explore their beautiful country."