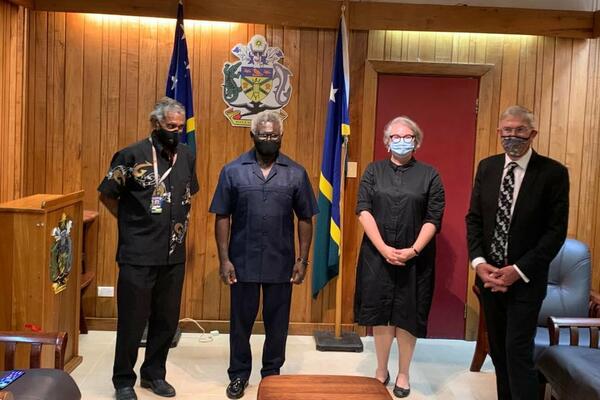 Prime Minister Manasseh Sogavare and the senior delegation discussed how Australia can best deliver assistance during this challenging time. The delegation also discussed the continuing support of Australia and the Pacific family under the Solomons’ International Assistance Force and how that ongoing mission was pivoting to support the COVID-19 response.

Prime Minister Sogavare acknowledged Australia’s friendship and commitment to supporting Solomon Islands, including the rapid response by Australia and the Pacific family during the recent civil unrest in November 2021. He said, "we are not only partners and friends, but we are also neighbours."

Twenty-four Royal Australian Air Force (RAAF) flights have arrived in Honiara under the Bilateral Security Treaty between Solomon Islands and Australia since the November 2021 unrest, with the last four delivering critical COVID-19 support including medical equipment and supplies.

Head of the Office of the Pacific, Ewen McDonald, thanked Prime Minister Sogavare for his gracious welcome. He expressed Prime Minister Morrison’s strong commitment to the Pacific Family and re-confirmed the long-standing friendship between our two nations.

"Australia will stand side by side with Solomon Islands throughout this COVID-19 outbreak’, said Mr McDonald. ‘As Prime Minister Sogavare has highlighted, while our countries are separated by an ocean they are also joined together by waves of friendship."

The delegation discussed the progress on joint commitments made by Prime Minister Sogavare and Prime Minister Morrison in their 2019 Joint Statement, including taking forward cooperation in policing, infrastructure, health and security, including the Western Border and Patrol Boat Outpost.

AFP Commissioner Kershaw presented Prime Minister Sogavare with a plaque commemorating the sacrifice of Adam Dunning, an Australian Federal Police officer killed on patrol in Honiara with RAMSI in 2004, at 26 years of age.

"The Australian Federal Police was honoured to support Solomon Islands during this difficult time. I’m proud of the strong links between our police forces, our ability to work seamlessly together, to support the Solomon Islands people. This cooperation will only continue to grow," said Commissioner Kershaw.