Australia Will Be with Solomon Islands in Good and Bad Times: Mason 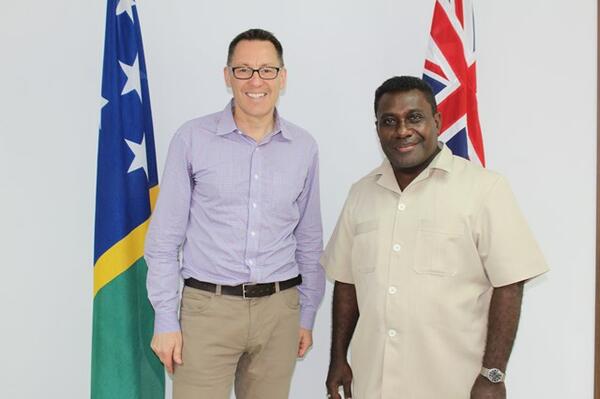 Mr Mason conveyed the message on behalf of the Australian Prime Minister Tony Abott and Foreign Minister Julie Bishop to Prime Minister Lilo during a brief meeting in Honiara yesterday.

“Australia will be with you and we will always be friends both in good and bad times,” Mr Mason said.

Mr Mason also applauded Prime Minister Lilo for his leadership during these challenging times in making sure the current situation is well under control.

“Please convey my Government’s appreciation and gratitude to the Government and people of Australia for your continuous support,” Mr Lilo said.

The Prime Minister particularly made mention the deployment of the 33 AFP officers and expertise with relief supplies that arrived on Hercules AAF in Honiara on Wednesday night.

The AFP officers are here to provide security at the Gold Ridge Mining site which has suspended operations since the flooding.

Mr Lilo also explained to the Australian Parliamentary Secretary that this was the worst flooding the country has ever experienced.

“It’s a disaster that could have crippled the country as critical as well as the only bridge that connects Honiara was at risk of collapsing,” he said.

The Prime Minister said if that had been the case, it would be more disastrous.
However, he said swift response by engineers have avoided that to happen as the bridge have now been certified to re-open temporarily until further work is done.