Australia to Send Coronavirus Vaccines to PNG Amid Outbreak 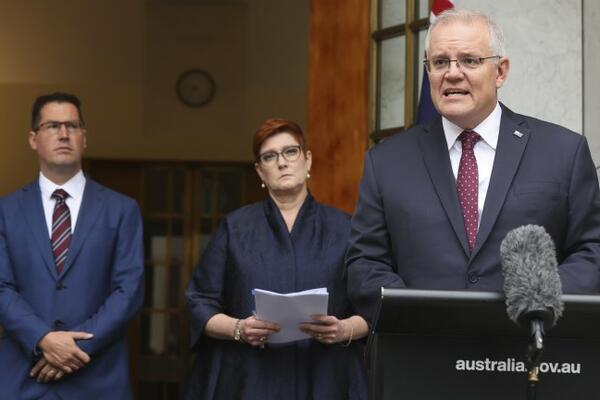 "We have always been extremely concerned for our Pacific family, for our neighbours, and over the course of this last year, the Pacific community has done such an extraordinary job to substantively keep their islands free of COVID-19," Mr Morrison said.
Source: smh.com.au
Share
Thursday, 18 March 2021 11:28 AM

Australia will ask AstraZeneca and the European Union to fast-track the export of one million doses of the coronavirus vaccine to be able to sent straight to Papua New Guinea as part of a bid to crush the pandemic outbreak in Australia's closest neighbour.

The government has also placed new limitations on travel to and from the Pacific nation.

Prime Minister Scott Morrison said he had spoken with Papua New Guinea's Prime Minister, James Marape, about the outbreak, where more than 100 people were testing positive each day.

"Throughout the course of the COVID-19 pandemic, we have always been extremely concerned for our Pacific family, for our neighbours, and over the course of this last year, the Pacific community has done such an extraordinary job to substantively keep their islands free of COVID-19," Mr Morrison said.

"But we've known that that challenge was always going to be too great for Papua New Guinea as time went on. And that, indeed, is proving to be the case now."

Another 588,000 vaccines will be sent to Papua New Guinea by June as part of the international COVAX facility.

An AUSMAT team will arrive in Papua New Guinea next week to help with the response to the outbreak and help plan for the vaccine rollout, with further staff to be deployed in coming weeks. Vaccinations on the Australian islands of Torres Strait will also ramp up.

Passenger flights from Papua New Guinea to Cairns will be suspended from midnight on Wednesday, and flights have already been suspended from a PNG mine where the rates of testing positive for coronavirus was almost half.

Passenger caps from Port Morseby to Brisbane will be reduced by a quarter, Mr Morrison said, and travel from Australia to Papua New Guinea will be suspended, except for essential and critical workers, including humanitarian activity. Fly-in fly-out workers who travel between the two countries will need to stay where they are.

The spread of coronavirus throughout Papua New Guinea was likely to be much higher than official numbers showed, Chief Medical Officer Paul Kelly told reporters on Wednesday morning.

"Recognising that they did not have the resources for mass testing like we have in Australia, so any number you see out of Papua New Guinea of cases and even deaths will be a major underestimate," Professor Kelly said.

"There is a big outbreak of COVID-19 in Papua New Guinea. We know this from the places that are able to be doing testing."

Half of women presenting to hospitals in Port Moresby due to pregancy were testing positive to coronavirus, Professor Kelly said.

"We're seeing a large number of health care workers on the front lines in Papua New Guinea now coming down with COVID-19. These are all signs that there is a major epidemic in the community."