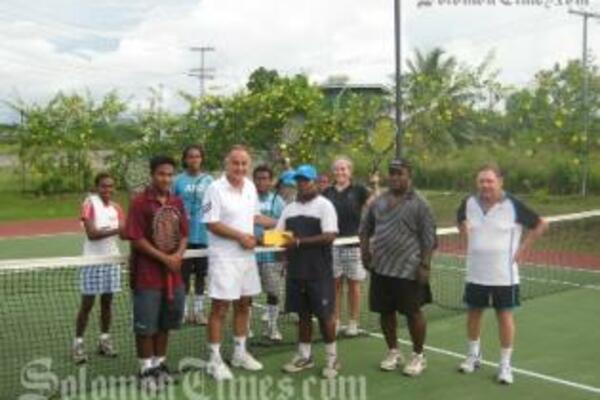 After the game, Mr Ingruber presented Solomon Islands Tennis Federation with a cheque for more than SBD64,000, funded under the Australian Sports Outreach Program, to support the junior tennis development in Solomon Islands.

The program will target schools, where teachers will also learn to coach junior tennis players and facilitate tennis competitions. Once established in regional areas, Solomon Islands Tennis Federation will organise a national tennis competition in Honiara, where the best players can compete.

Presenting the cheque, Mr Ingruber said "It is more than evident from the talent on the court today, that Solomon Islands already has a number of highly skilled tennis players. This funding will contribute to the development of junior players, further increasing Solomon Islands' international rankings."

Head Coach, Joel Benjamin, said that Australia's assistance means a lot to Solomon Islands Tennis Federation, providing the opportunity to develop the skills of junior players, who could go on to become international sporting heroes. "We would like to thank the Australian High Commission in Honiara and the Australian Government for the generous support".

Solomon Islands Tennis Federation was one of five sporting organisations in Solomon Islands which were successful in their application for funds through ASOP. In total, these projects will receive over SBD176,000 in sports funding from the Australian Sports Commission.