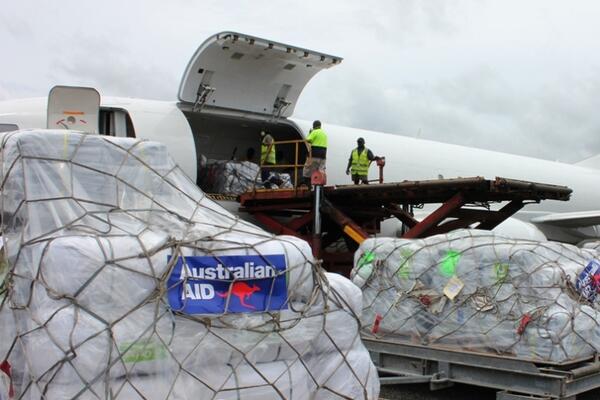 “The emergency stock will allow the NDMO and NGOs to replenish their supplies which were depleted responding to the tsunami and to have these stocks ready to respond to any further natural disasters,” Mr Anderson said.
Source: AusAID
Share
Tuesday, 05 March 2013 08:44 AM

The Australian High Commissioner to Solomon Islands, Matt Anderson has announced that Australia will provide a further A$700,000 (SBD$5.2 million) to assist disaster affected areas in Temotu Province.

Mr Anderson announced the additional support while at Henderson International airport inspecting the AusAID-funded charter plane carrying 14 tonnes of relief supplies. The 14 tonnes of supplies will replenish emergency stocks held by the National Disaster Management Office (NMDO) and NGOs in Honiara. A further 16 tonnes will be shipped to Honiara in the coming weeks. He was joined by officials from the NDMO and NGOs to see the supplies being unloaded at the airport.

$200,000 to the Solomon Islands Government for wharf and water supply repairs, transport of relief supplies and replenishment of the National Disaster Management Office’s emergency relief supplies;

$500,000 to Australian NGOs to work with local NGOS to replenish emergency supplies of food, water and shelter, delivery of non-food items and provide counselling support to affected communities. The four NGOs in Solomon Islands being supported include World Vision, Oxfam, Save the Children and the Adventist Development Relief Agency (ADRA).

“The emergency stocks allow the NDMO and NGOs to replenish their supplies which were depleted responding to the tsunami and to have these stocks ready to respond to any further natural disasters. As we are still in the middle of the cyclone season, this is critical,” Mr Anderson said.

“Our thoughts remain with communities affected by the disaster, and as a friend and partner to Solomon Islands, Australia remains committed to helping communities recover from the disaster.”

“The additional funding brings Australia’s support to Solomon Islands to A$1 million following the initial emergency response contribution of A$300,000.”

“Australia will continue to work with the Solomon Islands Government and NGOs to support both the emergency relief and also to assist with the longer term recovery work. This includes looking after the health and well being of communities, especially children.”