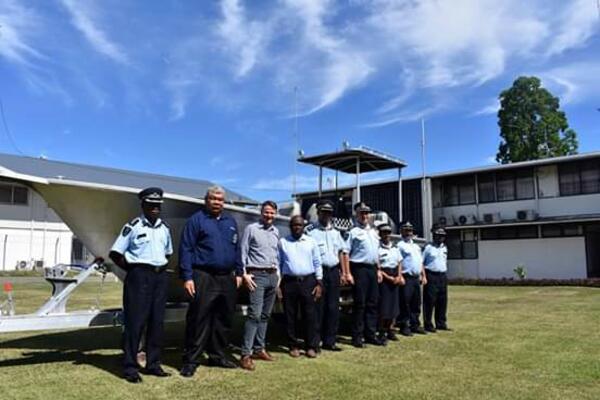 The new boat will ensure the RSIPF is able to actively patrol the border area to reduce the incidence of crime. It will make a big contribution to Western Border security and RSIPF associated policing operations.

The boat was officially handed over by Australian High Commissioner Roderick Brazier to the Minister for Police, National Security and Correctional Services, Honourable Anthony Veke and Deputy Commissioner of Police, Mostyn Mangau, during a ceremony at the Rove Police Headquarters in Honiara this morning.

Mr Brazier said the new boats would help to support the RSIPF’s increased presence and work in maintaining a safe and secure Western Border.

“These boats are a demonstration of Australia’s commitment to Solomon Islands as a close security partner, and of our two countries’ close friendship,” he said.

Deputy Commissioner of Police Mangau, said the RSIPF was grateful for the extensive support of the Australian Government.

“Thank you to staff at the Australian High Commission and advisors from the Solomon Islands Police Development Program who have worked hard with my officers to provide these boats,” he said.

“The boats have impressive capability, and will assist work across the RSIPF. Police from RSIPF Maritime, Police Response Team and SIPDP advisers will now commence training on using these vessels in a tactical and high risk environment.”

Recent incidents at the Western Border have raised concerns about unlawful activities, armed border incursions and threats to communities in Solomon Islands.

The RSIPF was directed by the Solomon Islands Government to maintain a permanent National Response Department, PRT contingent on the Western Border. The deployment of RSIPF PRT officers incorporates tactical, specialist trained and armed RSIPF officers.

Training programs for officers will continue in Honiara ahead of the boats being barged to Western Province to commence front line duties from Harapa in the Shortland Islands.