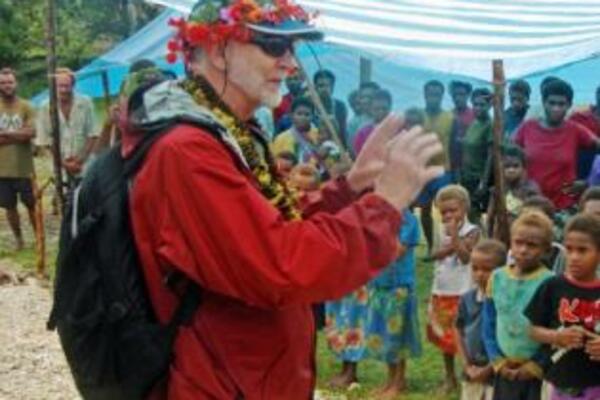 A leading malaria expert believes malaria could be eliminated from Temotu Province within a few years. The Chairman of the Malaria Reference Group, Sir Richard Feachem, visited Solomon Islands last week to view some of the country's malaria action programs, and said Temotu could soon be malaria-free.

"If the people of Temotu Province, under the leadership of Premier Hon. Edward Daiwo, continue this excellent work, we can expect a rapid decline in malaria and elimination in a few short years," he said.

Malaria is a preventable and treatable disease, but continues to kill around a million people every year. There are over 100 malaria-affected countries in the world today. Solomon Islands and Vanuatu are among 39 countries that are on the path to malaria elimination.

Solomon Islands and Australia are working closely together to eliminate malaria. A group of Brisbane-based organisations, supported by the Australian Government Aid Program, are working with the Solomon Islands' Vector Borne Disease Control Program to shrink the geographic incidence of malaria. The organisations involved are the University of Queensland's School of Population Health, the Australian Army Malaria Institute and the Queensland Institute of Medical Research.

The Solomon Islands Government aims to end deaths from malaria, to reduce the parasite incidence by 65 per cent, and to eliminate malaria from Temotu Province by 2014. Subsequently, it aims to eliminate malaria from Isabel and all other provinces to create a malaria free Solomon Islands. Doing so will have significant public health, community welfare and economic development benefits. The Brisbane-based organisations are helping to achieve this goal by providing assistance ranging from practical management to laboratory research into the genetics of both the mosquito vector and the malaria parasite.

The Australian Government Aid Program supports work of the group of international experts who provide guidance to the malaria elimination efforts in Solomon Islands and Vanuatu under the Malaria Reference Group. Sir Richard's visit included a trip to Lord Howe Island to see the progress made toward eliminating malaria in Temotu Province. He was accompanied by the Ministry of Health and Medical Services' Director for Vector Borne Disease Control, Albino Bobogare, who said Solomon Islands was rapidly moving from preparation for malaria control and elimination to massive scale-up of all the necessary interventions.

"During our visit to Lata, Nanggu and Mbimba in Temotu last week, we were excited to see widespread use of the new long-lasting insecticide treated bed nets," Mr Bobogare said. "In addition, spraying of houses is well underway, and the new malaria drug Coartem is being widely used in combination with the Rapid Diagnostic Test kits."

The Australian Government Aid Program has committed approximately SBD $83 million (AUD 13.8 million) to support Solomon Islands' malaria control and elimination effort over four years through to 2011. This funding complements support to Solomon Islands from the Global Fund, Secretariat of the Pacific Community, JICA and the World Health Organization.