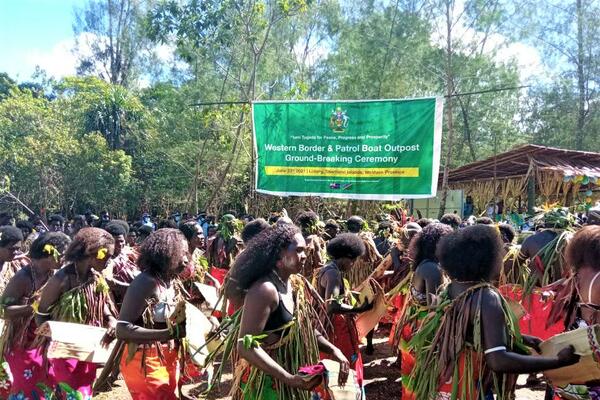 Prime Minister of Solomon Islands Manasseh Sogavare thanked Australia for the security partnership and described Solomon Islands and Australia as two nations not separated by the oceans but joined by the waves of peace, cooperation, prosperity and mutual respect.
Source: SIBC
Share
Thursday, 24 June 2021 09:04 AM

Australia and Solomon Islands have held a ground-breaking ceremony in the Shortland Islands for the Western Border and Patrol Boat Outpost.

“Australia is proud to be working closely with Solomon Islands to promote economic development and stability in the region, and strengthen and protect its Western Border,” Prime Minister Morrison said.

“We share an enduring and close friendship and this joint project demonstrates the strong security relationship between our two countries, as bilateral security treaty partners.

“The project will boost Solomon Islands’ capacity to respond to natural disasters, deliver health programs in the Western Border area and provide a foundation for economic growth in the region.

“Together we are advancing this important project while adapting to the challenges and complexities of COVID-19. Australia looks forward to working together to progress technical aspects of the project over the coming months.”

Prime Minister of Solomon Islands Manasseh Sogavare thanked Australia for the security partnership and described Solomon Islands and Australia as two nations not separated by the oceans but joined by the waves of peace, cooperation, prosperity and mutual respect.

“I was truly glad when Prime Minister Morrison offered to support the Government’s initiative to establish a Border and Patrol Boat Outpost,” Prime Minister Sogavare said.

“I must commend the steadfast support Australia has rendered in ensuring the safety and security of Solomon Islands. In fact, our friendship is one that is not only built on trust and friendship, but one that is cemented by our friendship and recognition of mutual understanding.”

The new facility will bring together police, customs and immigration officials in a single location to reinforce the security of Solomon Islands’ Western Border and promote peaceful cross-border movements.

Solomon Islands has chosen Lofung South in the Shortland Islands as the location for the Outpost. Construction will take up to three years. Engineers will conduct technical site investigations in the coming months on land and at sea, with the main works expected to commence in 2022.

Australia and Solomon Islands continue to work together to ensure that our Pacific home remains secure, stable and prosperous.