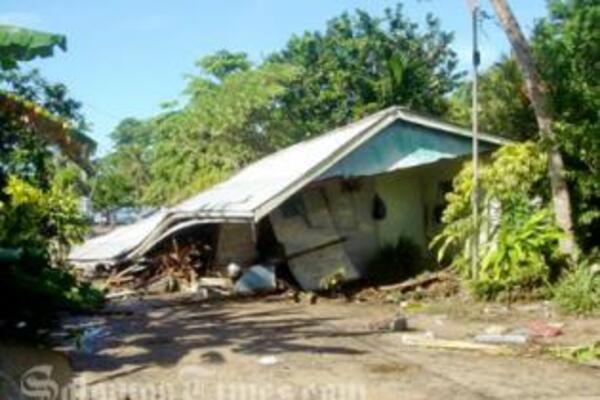 A family home in the Western Province damaged when the earthquake and tsunami hit in April 2, 2007.
Source: Photo Supplied
Share
Thursday, 02 April 2009 08:54 AM

Australia and New Zealand have reaffirmed their commitment to the ongoing recovery and rebuilding of tsunami-affected communities in Solomon Islands.

The April 2, 2007 earthquake and tsunami caused widespread damage to houses and infrastructure in Western and Choiseul Provinces.

Two years later, Australia and New Zealand continue to work in partnership with World Vision, Save the Children and Oxfam to help rebuild not only homes and essential infrastructure, but also livelihoods and hopes in affected communities.

The Australian High Commissioner, Peter Hooton, said the second anniversary of the tsunami was a time to pause to remember the 52 people who lost their lives, and to take stock of progress so far.

"Many communities were devastated by the April 2007 tsunami, and these wounds will take a long time to heal," Mr Hooton said.

"We recognise particularly that people in some communities are still living in less than adequate shelters. We hope that, in partnership with Solomon Islands Government, we will see significant progress this year in helping these families to rebuild their lives."

Australia has also provided SBD 8.7 million to the Ministry of Health and Medical Services to help reinstate essential health services like clinics and houses for health and medical personnel.

In Choiseul, Australia has funded Save the Children to help more than 1200 families across more than 50 villages where homes were damaged or destroyed by the tsunami. More than 80 per cent of households have received support, such as tools and building materials, as well as training in building better, stronger structures.

With Australian support, Oxfam is helping 364 families in Gizo to rebuild their houses, supplying materials including sustainable timber, and training for people to be able to build their new houses to be less vulnerable to future natural disasters. Oxfam is also working with communities to rebuild vital services like access to safe drinking water and clean toilets.

NZAID has been working with World Vision and more than 4000 families to rebuild houses in Western Province. Around 60 per cent of families have received building materials, milling fuel and tools, and 18 per cent have finished building a strong frame for their new house, based on World Vision's training in building stronger houses.

It has helped rejuvenate fisheries livelihoods by providing 992 dugout canoes to communities in Simbo, Vella Lavella, Shortlands and the Choiseul Islands, after their canoes were washed away in the tsunami.

NZAID has also helped solve the problem of reefs that were pushed up by the tsunami on Ranongga and Parara islands. Here, channels have been cut through the coral shelves to give communities continued access to the water.

The New Zealand High Commissioner, Deborah Panckhurst, said many communities should be congratulated for their hard work and commitment to rebuilding.

Australia and New Zealand join the Government and people of Solomon Islands in sending their prayers to all the families that suffered in the April 2007 tsunami.