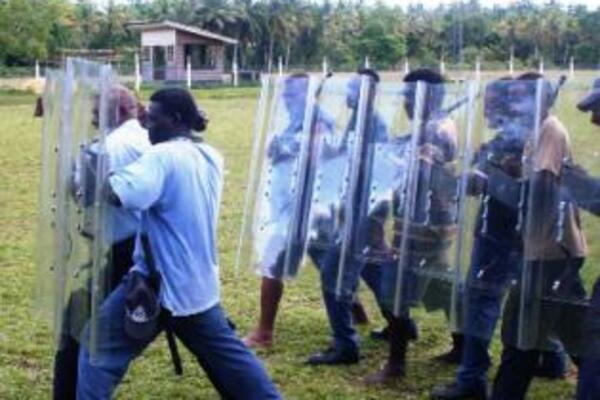 Auki police are gearing up for what is expected to be a major security operation in the township.

Police officers stationed at Auki have already commenced crowd and traffic control exercises this week to make sure they are ready to respond to any situation that may likely to escalated into a public disorder situation during the upcoming Solomon Games.

These exercises are carried out in anticipation of the major security operation for the upcoming tournament which is scheduled to be held in Auki in Malaita Province from Monday 23 June 2010 to Saturday 3 July 2010.

Additional RSIPF Police Response Team officers and RAMSI Combined Task Force personnel (Military) will be deployed from Honiara to Auki to assist with the security operation.

The Governor General who has been invited to officially open the tournament is expected to travel to Auki in a few weeks time.

The opening ceremony will be held at the Auki Primary School compound on Friday 25 June 2010.

Police believe the Games will be well attended by people from all over the Solomon Islands with up to 10,000 people expected to visit Auki during the tournament.

Police will be work closely with the organizers to ensure that the tournament will be carried out safely and peacefully and without disruptions.