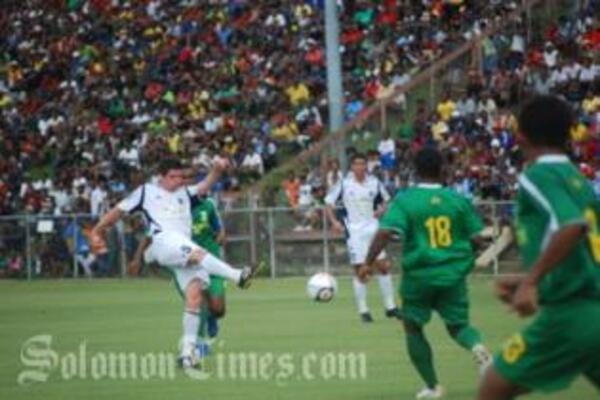 Auckland City is only a game away from entering the much-coveted FIFA World Club Cup. Their huge 7-2 win over Solomon Islands champions Koloale FC in Honiara demonstrates the superiority and class of Auckland FC.

The O-League battle continues with the return leg at Kiwitea St on Sunday. It will be a battle of titanic proportions for Koloale FC, as they would need to win 6-0 to claim the title.

The O-League final in Honiara started with the usual soaring temperatures and 20,000-plus turnout at the Lawson Tama Stadium.

Koloale had a dream start with captain Richard Anisua slotted a goal after Joses Nawo had beaten two City midfielders to create the chance.

Stung, the visitors regrouped but it was not until midway through the spell when Matt Williams found the equalizer.

A brilliant Ki-Hung Lee goal, from a 30-metre free kick gave City the lead for the first time in the 39th minute and Paul Urlovic, given a start in his 100th appearance for the club, increased the lead to 3-1 two minutes later.

The second half was almost all City with Vicelich nodding home for 4-1 nine minutes after the break. It then became the Keryn Jordan show as he scored three in 21 minutes to complete the rout.

Koloale managed a late second goal also from captain Anisua but the game was already well and truly over.