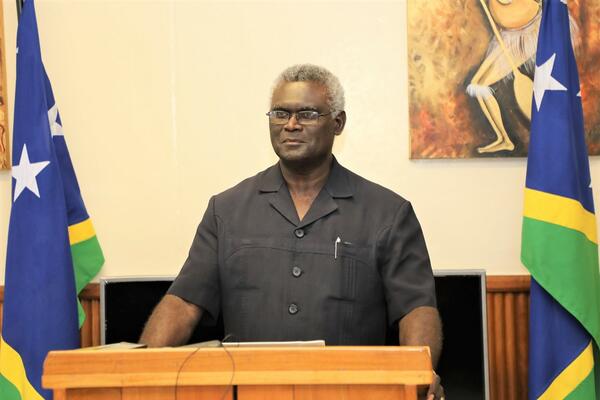 “Investors are reminded to comply with the Laws of the Country”, Sogavare says.
Source: File
By Georgina Kekea
Share
Tuesday, 15 December 2020 11:11 AM

Prime Minister Manasseh Sogavare says the ‘Business Monitoring Joint Agencies Committee’ of Foreign Investment Division of the Ministry of Commerce, Industry, Labour, and Immigration has completed its assessment on ‘compliances and enforcement’ in various business sectors in Solomon Islands.

In his weekly statement, Sogavare says this exercise and auditing is the first of its kind in 25 years.

“A total of 450 Foreign Investments were inspected during the operations”, Sogavare says.

He says in the Western Province, a total of 35 existing companies will receive notices on non- compliances.

“Show cause and stop notices were served to 10 wholesale and retail shops in Munda and Noro and penalties of $100,000.00 were imposed according to the Foreign Investment Act for non-compliances and breach of their conditions of approval.

“As a direct result of the inspections, the Government has so far collected a total revenue of $400,000.00, with more to be collected”, Sogavare announced.

He says in Isabel Province, three show-cause notices were issued to three logging companies for non-compliances.

“The expected revenue for SIG under inspections in Isabel is in the order of SBD$3 Million dollars”.

Meanwhile in Malaita Province, Sogavare says all retailing investments in the province were given time to update their registrations, this will expire on Friday the 18th December.

“Penalties will be imposed after this date”, Sogavare announced.

In Central Province, two show-cause notices were served to logging companies and the expected revenue is SBD$2 Million dollars for non- compliance.

“Further, three show-cause notices were served to two logging Companies and a Mining Company in Rennell and Bellona Province whilst notices were issued to all companies in Honiara for updating registrations and filing overdue progressive reports”, the Prime Minister says.

He says the Monitoring unit will perform periodical checks on companies that had been inspected and execute follow-ups on served show-cause notices.

“Investors are reminded to comply with the Laws of the Country”, Sogavare says.