Assessing Potential Oil Spills from WWII Wrecks in the FSM 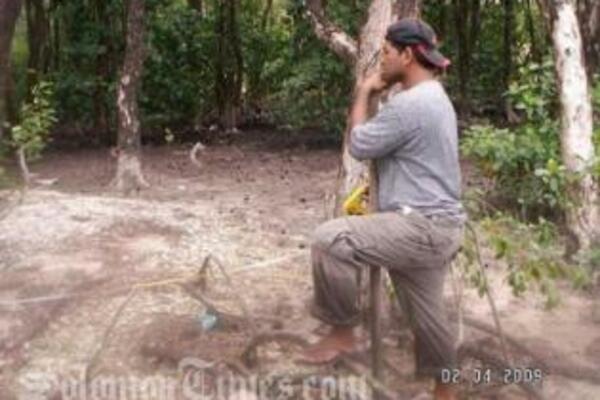 Press Release - Oil, chemicals and unexploded ordinance from an estimated 800 World War II Wrecks throughout the exclusive economic zones of Pacific Island countries and territories pose imminent danger to people, environment and fisheries of the region.

Of this total, more than 50 World War II shipwrecks can be found in Chuuk lagoon alone. Chuuk, formerly Truk, is one of the four states of the Federated States of Micronesia requesting assistance from the Secretariat of the Pacific Regional Environment Programme (SPREP) to assess the environmental risk posed by these wrecks.

In April, SPREP's Marine Pollution Adviser Anthony Talouli visited Chuuk after an Earthwatch Report assessed the leaking wrecks in Chuuk, one of the World's best dive spots, and found a number of areas of concern.

Talouli worked with members of the Chuuk Environment Protection Agency and other Government agencies to survey the coastal area and determine the extent of the present impact of the wrecks and determine the potential for from future oil spills and the resulting environmental damage.

"Part of the assistance SPREP provided was to assess what would happen to nearby coastal resources if the wrecks were to fail and the oil was to spill out catastrophically at once," Talouli explained.

In 2001 a State of Emergency was declared in Yap, another of the FSM states, after oil began leaking from the USS Mississinewa, a sunken World War II-era US military oil tanker. SPREP conducted an independent study on the wreck and the estimated impacts of the oil spill found that somewhere between 18,000 gallons to 24,000 gallons of oil had been released into the lagoon over a two-month period, but that some 5,000,000 gallons of oil remained in the wreck. The US Navy was tasked with offloading the remaining oil cargo in 2003.

Eight of the wrecks in Chuuk are confirmed to be slowly leaking however the duration of the leaks is not known. Anecdotal evidence indicates the leaks may be slowing down.

Talouli also looked at the economic impact a dangerous oil spill could have upon the Chuukse economy. As a popular international dive destination, Chuuk's main industry is tourism.

"We had four days of site surveys using the Shoreline Cleanup Assessment Technique (SCAT) where we visited wrecks, looked at currents and then determined the trajectory of a potential oil spillage. You could see oil slowly leaking and visible on the water. At this stage it is not dangerous however a typhoon could easily change that. Right now, I'd say it is a tier 1-2 oil spill, on a small scale," Talouli said.

While in Chuuk, Talouli carried out a refresher course with the local oil spill response team using equipment purchased in 2006.

"They did very well and proved to be experienced with handling the equipment. They are capable to cope with a Tier 1 or Tier 2 oil spill."

Talouli is now preparing an assessment report to present to the Chuuk State Government to assist them in developing a comprehensive strategy to deal with the wrecks.