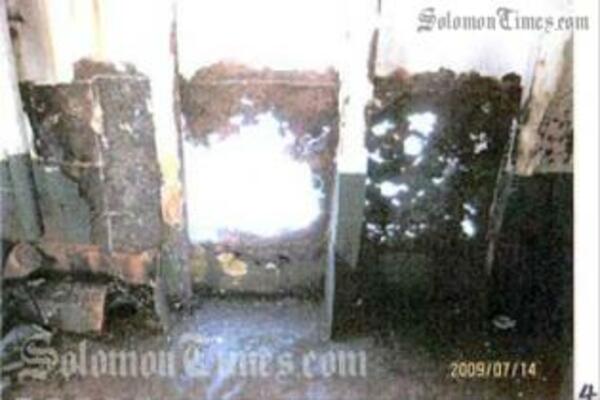 Corroded holes on the side of the MV Princess Ashika.
Source: Matangi Tonga Online
Share
Monday, 16 November 2009 05:00 AM

The Commission of Inquiry underway in Tonga into the tragic sinking of the MV Princess Ashika in Tongan waters has revealed grim details about the ship's condition and the voyage that resulted in the loss of 74 lives.

According to the Matangi Tonga Online, pictures shown at the Inquiry reveal big holes on the side of the vessel that was welded shut before the voyage.
The pictures also showed extensive corrosion.

According to the report, the 'pictures were provided to the commission by the General Manager of the Ports Authority Tonga, Commander Lupeti Vi, who in a letter dated October 6, 2009, confirmed that he had received the pictures four days after the sinking on August 5' and stated that 'in his experience as a seafarer the pictures revealed the defects and the condition of the MV Princess Ashika'.

According to the Matangi Tonga, a marine officer who surveyed the MV Princess Ashika vessel on July 2 the day after its arrival in Nuku'alofa, told the Ashika Inquiry 'that the ferry was not seaworthy and was dangerous to the public due to the widespread corrosion that invaded the entire vessel'.

Lou Pale gave testimony this morning at the Inquiry into the sinking of the Ashika and confirmed that as a Marine Officer for the Marine and Ports Division under Tonga's Ministry of Transport, he first viewed the vessel when it arrived in the capital on July 1 from Fiji. On first observation the condition was bad and he saw corrosion on the deck that extended throughout the vessel and some areas were newly painted over like the railings.

Lou said he carried out a survey of the vessel on July 2 and observed a deficiency list of faults to be rectified, issued by his division.

On being questioned by the Assisting Counsel to the Commission Manuel Varitimos about the deficiency list, he said on July 2 it was his opinion that the Ashika was not seaworthy.

In another report by the Matangi Tonga, a senior Marine Engineer 'who surveyed the MV Princess Ashika vessel in Nuku'alofa on July 2 said he told the Acting Director for the Marine Division on numerous occasions that vessel was in an unfit condition, and on one occasion he specifically asked him to stop it from sailing'.

'Onesi Tu'ifua, a Senior Marine Engineer with the Marine and Ports Division at the Ministry of Transport, told the Royal Commission of Inquiry today, that from July 1 to August 5, 2009, he asked the Acting Director Viliami Tu'ipulotu to please stop the vessel from sailing due to its unfit condition.

In addition, the witness confirmed having voiced his concern over the poor state of the vessel and its unsuitability to sail, to SCP Managing Director John Jonesse, who in return did not take much care of what he said.

The marine engineer was one of the surveyors assigned from the Ministry of Transport to conduct a detailed survey of the vessel in Nuku'alofa on July 2 after arriving from Fiji on July 1. He said he was never asked to go and survey the vessel in Fiji and they were only notified to do the survey when it arrived in Nuku'alofa.

The Inquiry also heard from survivors of the disaster, one who said he asked the captain to turn back.

According to the Matangi Tonga, a 70 year old passenger who survived the sinking of the MV Princess Ashika but lost his wife and young daughter, told the Royal Commission of Inquiry 'that during the fatal voyage he had asked Captain Maka Tuputupu to return to Nuku'alofa after seeing water coming through the ramp on the cargo deck'.

Tevita Lotaki Kanongata'a gave evidence for the first time this morning and confirmed that he spoke with the captain after 11pm about their concern with the water coming into the cargo area and asked to return to the capital given the fact that Malinoa Island was still in sight and they were closer to Nuku'alofa than to Ha'apai.

"I told him please return to Nuku'alofa because we had children and our wives onboard and I was also concerned for myself because I was too old to swim."

The witness said the captain responded that he saw it and his crew had also reported it to him and illustrated that he knew how much water the cargo deck would take in different stages of their voyage.

The witness also agreed with a suggestion made by the Assisting Counsel to the Commission, Manuel Varitimos, that the captain expected a certain amount of water at different stages of their voyage. And he believed that the captain accepted the fact that the vessel was taking on water, due to the illustration he gave him. The captain also told the witness if there was too much water taken in he would run the vessel onto a reef.

According to the report, Mr. Kanongata'a, a seafaring man himself, 'was concerned with the sight of water coming through and not seeing it go out because it was not normal and he went up and told his wife that the vessel had holes. And because he was the most senior he was encouraged by other passengers to go and see the captain and raise their concern'.

He said he went up to the bridge and a crew member was currently steering but the captain was there. "I asked him please return to Nuku'alofa because we, our children and wives, were onboard and in addition, Malinoa was still in sight and we were nearer to Nuku'alofa than Ha'apai."

He said after the captain responded illustrating the water expected to take in, he went back and told the concerned passengers including his wife about their conversion and they were satisfied with the result. He recollected that when he was making his way down from the bridge it was very difficult because the vessel was already leaning towards the port (left) side. And then the speaker system relayed a message from the bridge for all crew and able passengers to go down and help bail out water in the cargo.

This was 15 minutes before the vessel sank, said the witness who went down to help bail out water but a crew came up and said not to go down because they would drown and he was already wet.