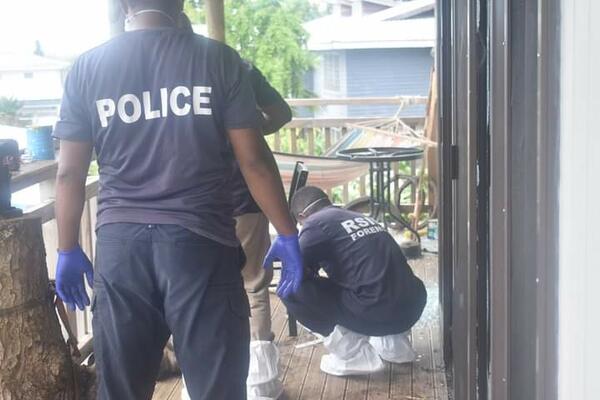 Police on site conducting investigation at the likely cause of the bomb blast.
Source: Supplied
Share
Monday, 21 September 2020 17:36 PM

The Royal Solomon Islands Police Force (RSIPF) reassures the residents living in and around the location of the fatal bomb blast last night at Tasahe in West Honiara, that they are safe to continue with their normal activities.

The residents of the Tasahe area in West Honiara are only adviced to stay away from the location of the incident as it is a crime scene.

A British and an Australian national working for the non-government organisation, the Norwegian People’s Aid (NPA) on a non-technical survey of explosive remnants of World War Two in Solomon Islands died in the bomb blast at the office of the project located within the residential area of Tasahe in West Honiara.

“A number of police units are now involved in the investigation including Forensics, Explosive Ordnance Disposal (EOD) and the Serious Crime Unit. The Police Response Team (PRT) and our frontline offices are providing security at the site of the incident,” says Officer-in-Charge of EOD, Inspector Clifford Tunuki.

Inspector Tunuki adds, “The EOD team is now waiting on the results of the Forensic investigation and they will then complete their report.”

“The RSIPF EOD had a good working relationship with the NPA project and so we are concerned that they decided to conduct EOD operations within a residential area.

"RSIPF did not know these items had been moved to the NPA residence. If we had known we would have requested that the items be moved to a safe location such as Hell’s Point east of Honiara,” says Inspector Tunuki.

“We have now moved all other unexploded ordnances discovered at the NPA residence at Tasahe to Hell’s Point as of this morning so the residence is now safe for our investigators to do their work.”

“As investigations are still in the early stages we do not know what exactly happened that led to the bomb blast but preliminary investigations indicate they had several items of UXO at the residence and they may have been conducting some UXO work. RSIPF was not involved in those operations,” says Inspector Tunuki.