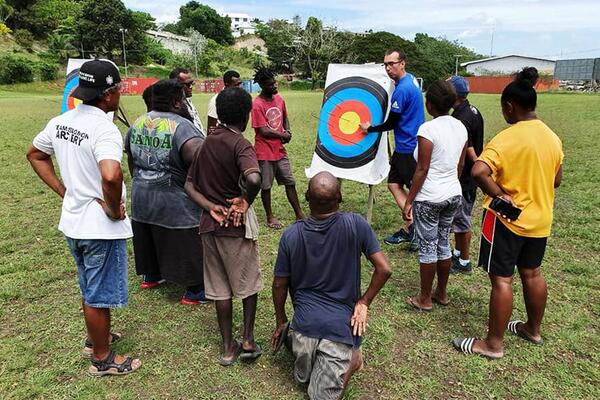 As an activity – and like much of the world – archery is very much a part of the people of the Solomon Islands as Traditional bows are still used for hunting and the bow and arrow has long been a cornerstone of food collection.
Source: https://worldarchery.org
Share
Friday, 13 September 2019 07:35 AM

The Solomon Islands will host the Pacific Games in 2023 and it’s a large responsibility for a national federation that only returned as a World Archery member federation two years ago in 2017.

Situated to the east of New Zealand, near Papua New Guinea and Vanuatu, the state consists of six major islands and over 900 smaller islands. Growing a sport across such a country is difficult.

As an activity – and like much of the world – archery is very much a part of the people of the Solomon Islands.

Traditional bows are still used for hunting and the bow and arrow has long been a cornerstone of food collection. Residents of the islands of the Temotu Province are so renowned for their archery skill that all local sports teams are named ‘the arrows’.

But the Solomon Islands has very few competitive archers, only around 20 in total. A few local coaches have been trained over the past few years, too.

World Archery development agent Robert Turner spent a week in the nation’s capital in August implementing the next phase of a development plan to grow grassroots archery. He visited schools across the capital, Honiara, training physical education teachers to safely coach students.

“We are thrilled to see how students responded to our programme during the visit,” said Solomon Islands Archery development officer Andrew Lano. “Robert’s presence was absolutely great because it motivated the young boys and girls to give archery a try.”

The example programmes run by Robert will be continued by local teachers and coaches. It’s hoped that, by the time the Pacific Games arrive in 2023, competitive archery will be much more prevalent.

“The idea is to have them continuing in grades, starting at the lowest and working their way up,” said Turner. “With the work done, we are hoping to see strong growth in membership as well as in the skill level of the archers.”

The federation has been making low-cost PVC bows and now has 60 available for use in schools.

By focusing on making archery available to young people, the national archery federation is looking to build a long-term future for the sport across the Solomon Islands.