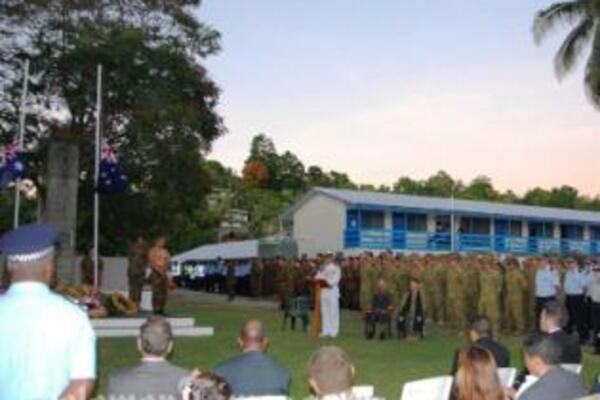 Over 400 people from the local and expatriate communities gathered at The Cenotaph at dawn on Monday 25 April for the Anzac Day Service of Remembrance.

Guests, including Acting Governor General Sir Allan Kemakeza, Prime Minister Danny Philip, Foreign Minister Peter Shanel and Police Minister Clay Forau, paused to reflect on the sacrifices of Australians and New Zealanders who have served in every theatre of war since 1915.

The Anzac tradition was born 96 years ago on the shores of Gallipoli in Turkey during the First World War where the feats of the Australian and New Zealand Army Corps (ANZAC) forged a legend of mateship, determination, courage and resourcefulness.

In his address to the Service, Australian High Commissioner, Frank Ingruber, said that "the Anzacs set standards that have inspired their countrymen for generations. It is part of who and what we are, and what we strive to be as countries, and as individuals."

Mr Ingruber said that "In Solomon Islands, Anzac Day also provides an opportunity to acknowledge the important contribution of Solomon Islanders during the Second World War, particularly the intrepid Coast Watchers. For it was in Solomon Islands that the relentless Japanese advance was first halted, and then turned back."

"The gift that the Anzacs, the Coast Watchers and the men and women currently serving in our armed forces have given to us is that most important of all gifts - the gift of freedom."