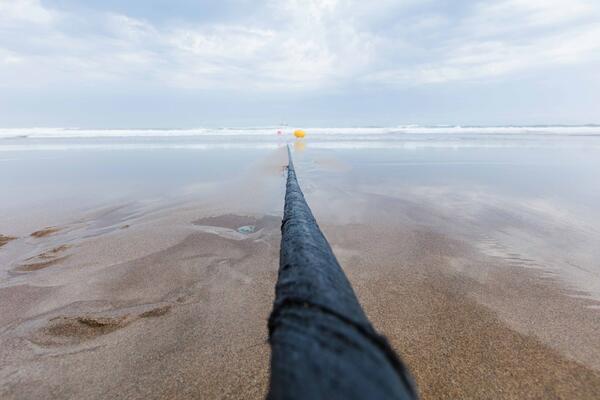 Undersea cables are the backbone of the internet connecting faraway places like the Pacific to the world. These submarine fiber optic cables permit the world’s web traffic to flow.
Source: popsci.com
Share
Tuesday, 29 June 2021 11:31 AM

After rejecting a low bid from China due to security concerns, the Pacific island of Nauru is in discussions to connect to an Australian undersea communications network.

The United States and its Pacific allies have voiced concerns that cables laid by China would be vulnerable to breaches of the cable by the Chinese.

The island of Nauru earlier rejected a World Bank-led cable tender, due to concerns the contract would be awarded to the former Huawei Marine, now called HMN Tech, following the Chinese firm submitting a bid that was 20 percent lower than the closest rival.

After rejecting the Chinese bid, Nauru, with its population of just over 12,000 people, is seeking assistance from the Asian Development Bank (ADB) to fund a new communications cable.

"ADB is involved in very early discussions with the government of Nauru to explore possible options to help fund an undersea cable to deliver low-cost, high quality internet service," the Asian Development Bank said in a statement to Reuters.

"The details of the connection arrangement and funding sources will be determined in due course."

The new Nauru cable would link Nauru to the Solomon Islands capital of Honiara, a distance of about 776 miles.

From the Solomon Islands, the new communications cable would be connected to the Coral Sea Cable system, a 2,700 mile network that connects Australia to the Solomons and Papua New Guinea.

The new cable, with majority funding by Australia and built by Vocus Group of Sydney, was completed in 2019 to block a bid by Huawei Marine.

Nauru was the first country to voice concerns about China's bid, during the World Bank tender process last year, to build subsea cables for Nauru, the Federated States of Micronesia and Kiribati.

The United States then issued a warning to the island nations that the HMN Tech bid posed a regional security threat.

The project was later discontinued after the island governments declined to award a contract.

"The Chinese government has always encouraged Chinese enterprises to carry out investment cooperation in various fields, in accordance with market principles and international rules and on the basis of abiding by local laws," Zhao Lijian, a spokesman at the Chinese foreign ministry, said in a statement.

"Chinese enterprises have always maintained a good record in network security, and the so-called Chinese espionage activities are groundless," Zhao told the media on Thursday.

Washington has urged governments to avoid awarding contracts to Huawei and other Chinese companies when seeking to purchase sensitive communications equipment, claiming the company could provide data to the Chinese government for spying.