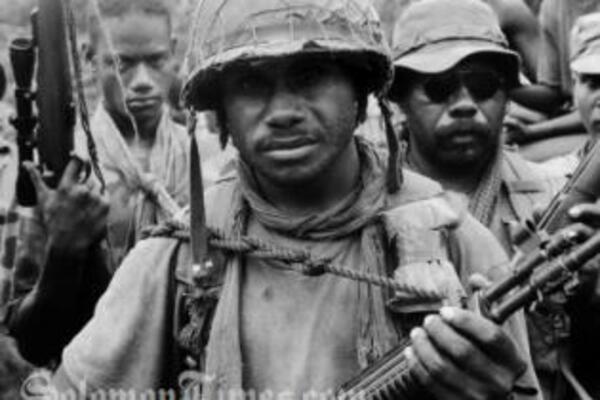 Andrew Te'e, the Former Commander of the Isatabu Freedom Movement, during the ethnic crisis.
Source: fotofreo.com
Share
Friday, 15 July 2011 09:33 AM

Andrew Te'e is a convicted Murderer who was serving seven life sentences for incidents relating to the ethnic tensions.

The most recent sentencing was in March when Te'e pleaded guilty to shooting a man at point blank range with a .22 rifle.

The conditional pardon came on the recommendation of the Committee on the Prerogative of Mercy, and is effective immediately.

There are two conditions attached to his pardon.

The first is that Te'e must not commit any criminal act for three years from the date of release, failing which he is to be returned to prison to serve the remainder of his original sentence without further trial.

The second is that Andrew Te'e is to take active part in the ongoing reconciliation and peace process on Guadalcanal and throughout Solomon Islands.