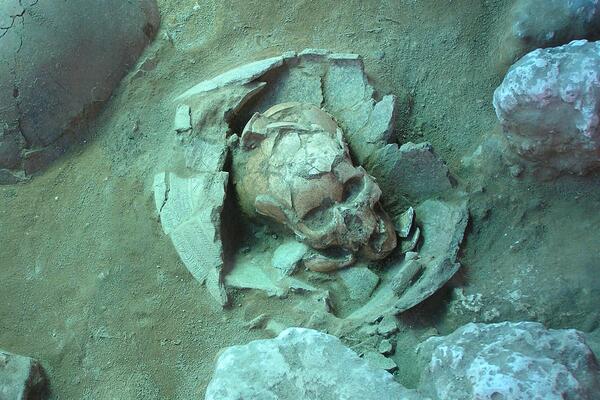 To make the analysis, the researchers used a sample from the petrous bone — a bone in the skull near the ear — that they've found to be best at preserving DNA that's many thousands of years old.
Source: Photo supplied
Share
Wednesday, 05 October 2016 09:16 AM

A new study of ancient DNA could upend our understanding of the seafaring people who travelled vast distances to make their home in the Pacific.

Vanuatu and Tonga's first inhabitants may have come from Asia and not from neighbouring Papuan populations in New Guinea, Australia and the Solomon Islands as previously imagined, according a report published in the journal Nature.

"These early populations were the first people to get to the region of what we call remote Oceania ... 3,000 years ago," said Stuart Bedford, professor at the College of Asia-Pacific at the Australian National University and report co-author. "It's not an exact match, but the closest match is to Indigenous populations in the northern Philippines and Taiwan."

The movement of people around the Pacific has long been a mystery, with small clues in the artefacts left behind.

"What happens about 3,000 years ago, is we get this sudden archeological signature in the islands of Papua New Guinea, right across to Tonga and Samoa — what we call the Lapita people," Bedford explained. "It's identified primarily through very distinctive pottery, but also introduced domestic animals like chickens."

Formerly, the theory was that these people mixed with Papuan populations in Papua New Guinea and the Solomon Islands, who arrived around 40,000 years ago, before moving on to colonise the empty regions of Tonga and Vanuatu. With this report, that narrative is being reimagined.

"How do you explain this population coming from somewhere like Taiwan and crossing through these areas, and there's no evidence of mixing [with the Papuans]?" he asked. "They remain an Asian population, and it's not until later on that you get the genetic crossover."

It's still a mystery as to what kept the populations apart, at least at first. "It might be some kind of cultural mechanism, or religious taboo," Westaway suggested. "There's something that suggests they didn't want to intermarry with the Papuan population."

These days, most Pacific Islanders have varying mixes of Papuan and east Asian DNA. "The very first population appears to have been east Asian with minimal mixing," Bedford added, "so mixing comes after that initial colonisation."

Sourcing ancient DNA in tropical areas where remains quickly deteriorate is one challenge that has held back study in this area.

"This is the first time we've been able to extract such early DNA in the Pacific," Bedford said.

To make the analysis, the researchers used a sample from the petrous bone — a bone in the skull near the ear — that they've found to be best at preserving DNA that's many thousands of years old. "If you're going to get DNA from an ancient population, you've got to go for this bone," Bedford said.

Ultimately, the DNA tells a more detailed story than the cultural traces the Lapita people left behind.

"It's very unexpected that these populations would be Asian — these ancient DNA signatures are revealing a story we can't just obtain from the archeological record alone," Westaway commented.

In Bedford's view, the report reinforces the cultural mix that's already known and celebrated in the Pacific. "In many ways, it's the European divisions of the Pacific — Polynesia, Melanesia, Micronesia — [it's] those old colonial style boundaries that are being challenged," he said.