An Experience of a Lifetime 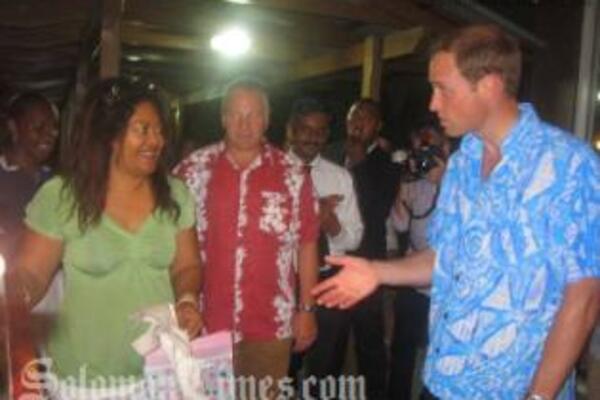 At first glance of the Art by local Artist, Brad Pugeva, all Prince William could manage was a "Wow!"
Source: Solomon Times
Share
Monday, 17 September 2012 08:17 AM

The Solomon Islands art industry hit a milestone last night with the handover of one of its exotic and unique art by local business woman, Ms. Ruby Lee, to the Duke and Duchess of Cambridge at the Heritage Park Hotel in Honiara, Solomon Islands.

Ms. Ruby Lee was among screaming fans waiting patiently along the road for hours to catch a glimpse of the Royal duo while they travelled into town on the Tomoko Vehicle upon their arrival.

While waving excitedly amongst the crowd, Ms. Lee had the very special gift wrapped and tucked away in the back of her truck, waiting on the opportune time for the handover of the gift. The handover of the exotic art had to be done that night and was more special because it was not for the Duke and Duchess of Cambridge but to be presented to a specific Royal.

With the chaotic traffic jam, it was impossible to reach the Royal duo upon their arrival at the Heritage Park Hotel from the St. Barnabas Cathedral. The only likely time was when they returned from their Island Feast at the Governor General's house, and it turned out to be perfect timing for the handover.

Surrounded by her family as the Duke and Duchess approached her from the lobby of the Hotel, Ms. Lee could only manage a smile as Prince William greeted her. It was then that Ms. Lee stated that she had a gift for Prince William's brother, Prince Harry, who is away in Afghanistan. She then unveiled the unique Art made by well known local Polynesian Artist, Brad Pugeva, who hails from the Rennell and Bellona Province.

At first glance of the Art, all Prince William could manage was a "Wow!"

"Is that really for my brother? Wow! He just had his birthday yesterday. Thank you very much! He will love it," Prince William told Ms. Lee, who explained the significance of the Art to the Island of Rennell and Bellona Province.

The Duke of Cambridge then turned to his Private Secretary and told her to organize packing the gift so they can "take it back for Harry".

The Duchess of Cambridge also said that Prince Harry loves Art and that he would appreciate it very much, especially since it was his birthday. It was also then that Ms. Lee gave another gift to the Duchess of Cambridge for her sister, Pippa Middleton. The gift is a summer butterfly blouse, called Ma'ine, from her Daughter of Solomons collection from her company, Solomon Indulgence.

With more exchange of words, the royal duo then left to their rooms for the night, leaving the international media to flutter around Ms. Lee and the exotic painting that will be handed over to Prince Harry upon arrival of the Duke and Duchess of Cambridge.

Ruby Lee's company, Solomon Indulgence is a fully fledged local company that concentrates on Organic Cosmetics products. It has also recently gone into its own clothing range on men's summer and women's summer wear. For more information on the gift for Pippa Middleton, you can email solomonindulgence@hotmail.com

The local Artist, Brad Pugeva, is a 28 year old male who dreams of owning an Art Gallery of his own. Brad paints in various diverse colors but prefers earth tones and shades. To know more about his various Artworks or the specific Art presented to Prince Harry, Brad can be contacted on brad_pugeva@yahoo.com