Ambassador of the Republic of Indonesia Presents Credentials 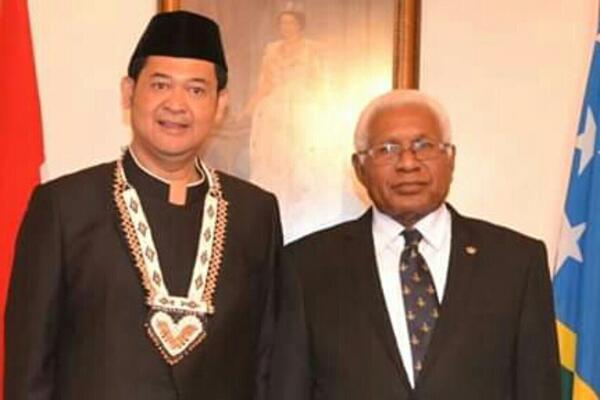 Ambassador of the Republic of Indonesia, His Excellency Mr. Andriana Supandy has presented his credentials to the Governor General His Excellency Right Reverend David Vunagi in Honiara today yesterday.

Ambassador Supandy said the Republic of Indonesia and Solomon Islands shared many common interests and it is important that the two countries must enhance bilateral cooperation based on mutual respect, friendship and cooperation.

Supandy said since the establishment of diplomatic relations in 1983, cooperation between the two countries has become very wide and multisectoral, among others are exchange support both in international or regional organization, and the most important are education as well as development and capacity building cooperation.

“Interaction between our leaders and high-ranking officials have been very significant, including the latest was:

1. The Bilateral Meeting between Prime Minister Rick Hounipwela and President Joko Widodo during the APEC Summit on 17th November 2018.

He said Indonesia also would like to encourage the visit of business community of the two countries to increase cooperation in trade, investments and tourism.

“It is also important to strengthen mutual understanding among people of Indonesia and Solomon Islands so that the Government of Indonesia would like to facilitate the people to people contacts.

“In this light, the Government of the Republic of Indonesia hopes to enhance bilateral relation with Solomon Islands in various fields, including political and security, economy and development, social culture and education since the two countries have many potentials for future development,” Mr Supandy said.

Meanwhile Governor General Rt. Rev. David Vungai welcomed Ambassador Supandy saying over the last thirty six (36) years, Solomon Islands and the Republic of Indonesia have enjoyed the close diplomatic relations that has been nurtured on mutual respect carried out on the joint belief, entrenched in fundamental principles, values of freedom, respect for sovereignty and rule of law, democracy and the shared vision for progress and prosperity for the people of both countries.

“Let me commend your Government’s commitments towards prioritizing cooperation in the fields of Political and Security, Economy and Development, Social Culture and Education fields,” he said.

Rt. Rev. Vunagi said there are Agreements and MOUs between the two countries that are yet to be finalized and signed.

“May I appeal to the Government of the Republic of Indonesia through your good self-Excellency and the Government of Solomon Islands, to carry out the administrative processes efficiently and get the Agreements signed for the implementation stages,” he said.

He assured Ambassador Supandy of the Solomon Islands Government support during his term in office.