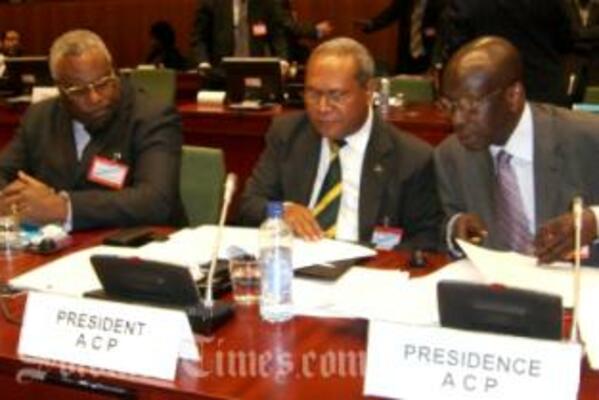 Solomon Islands Ambassador to the European Union, His Excellency Mr. Joseph Maáhanua, successfully co-chaired with his Czech Republic counterpart, the 59th Session of ACP-EU Committee of Ambassadors in Brussels, Belgium, on Friday.

Mr Ma'ahanua, who currently chairs the ACP Committee of Ambassadors, brought to the attention of the European Union several pressing issues and matters that the ACP Group wants to be discussed at the Joint ACP-EC council next month in Brussels.

The meeting also allowed both sides to exchange views on development issues pertaining to the ACP-EU Development Partnership.

Principal amongst the issues raised by Ambassador Maáhanua is the current state of play of the Economic Partnership Agreement (EPA), trade cooperation, the second revision of the Cotonou Agreement, global economic and financial crisis and climate change.

On EPAs, Mr Maáhanua stated that of the 77 ACP states, only 36 have either initialed or signed a full or interim EPA.

He also took the opportunity to emphasize the need to ensure that EPAs are made inclusive and not divisive.

"We have to address all outstanding issues that have prevented EPAs from bringing about inclusiveness of both LDCs (Least Developed Countries) and non-LDC ACP countries.

"Unless we resolve the contentious issues and make EPAs fully encompassing, the pursuit for regional integration highlighted in the EC's communications and EU General Affairs and External Relations Council (GAERC) will not lead to the expected goals," Mr Ma'ahanua said.

He told his EU counterparts that: "Our Governments cannot therefore enter into agreements unless it is absolutely certain that those arrangements will lead to developmental benefits."

Similarly, the Solomon Islands diplomat called on the international community, in particular the member states of the Development Assistance Committee (DAC), to honour their commitments to Overseas Development Aid (ODA).

He said it is essential that efforts be made at the international level to ensure that the financial crisis does not become an aid crisis.

He said unemployment, hunger, mortality rates, schooling, inequalities, poverty will be negatively affected in the short and medium terms, threatening not only the economic progress achieved over the past years, but also progress towards attaining the MDGs.

The ambassador re-iterated that the ACP countries with the least responsibility in the financial crisis will be hardest hit by the economic consequences.

In this context, Mr Ma'ahanua underlined that the need for development financing resources is more acute.

The ACP-EU Committee of Ambassadors takes place once every year to prepare the agenda for the annual ACP-EC Joint Council of Ministers Meeting that takes place in the middle of the year.

Mr Ma'ahanua co-chaired the meeting in his capacity as the chairman of the ACP Committee of Ambassadors.

Solomon Islands currently holds the presidency of the ACP Group until July.