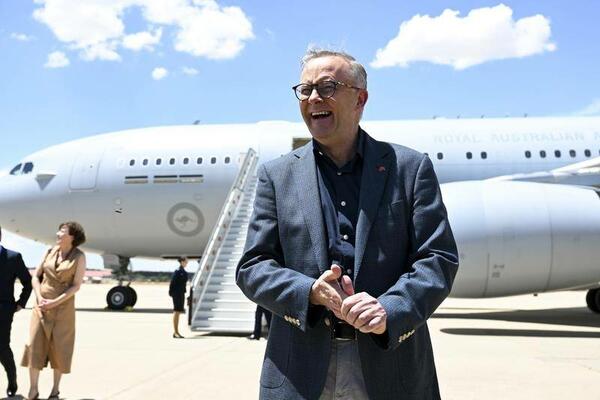 Anthony Albanese says his first conversation since becoming prime minister with Solomon Islands counterpart Manasseh Sogavare has been “very constructive”, ahead of the NATO Summit in Spain.

Speaking from the tarmac after arriving in Madrid overnight, Mr Albanese confirmed the two had spoken amid escalating regional tensions in the Pacific.

Mr Albanese says he and Mr Sogavare look forward to holding a meeting together at the forum, which will be held in Fiji mid-July.

Australia has been invited to participate in the NATO Summit in Spain alongside New Zealand, Japan and South Korea as part of the Asia-Pacific Four.

Although Russia’s invasion of Ukraine will dominate discussions, the “challenge” of China will also be addressed.

Mr Albanese says if democratic nations stand together in “solidarity” with Ukraine, China will be forced to rethink its “forward leaning” actions.

“What we know is that this brutal invasion is having real consequences for the people of Ukraine,” he said.

“And the people of Ukraine are inspiring the world with struggling to defend their national sovereignty.”

Later that evening, Mr Albanese and his partner Jodie Haydon will attend the NATO gala dinner hosted by Spain’s monarch.