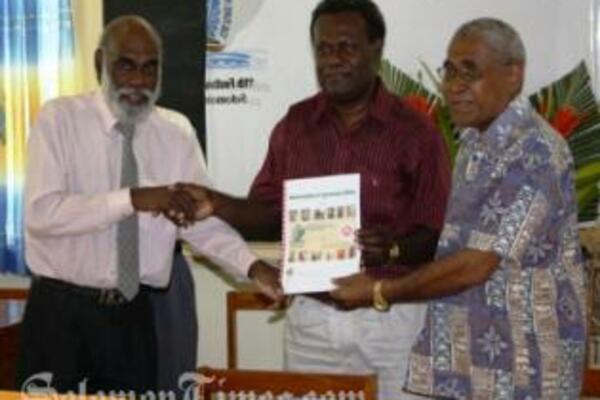 The National Organizing Committee of the 11th Festival of Pacific Arts has signed a significant Memorandum of Agreement with the Solomon Islands College of High Education to open the way for construction of festival facilities at a number of SICHE locations.

The signing ceremony in Honiara on Monday 8th August between the Permanent Secretary of Culture and Tourism, Mr Luke Eta, Chairman of the National Organizing Committee, Sir George Lepping and SICHE Director Mr Donald Malasa is important to allow the NOC to move on with preparations.

The signing ceremony was witnessed by senior officials from both parties including members of the local media.

Speaking at the occasion, Permanent Secretary of Culture and Tourism, Mr Luke Eta thanked the SICHE Council and Senior Management for allowing its grounds at Panatina Campus to host the main Festival Village where all participating countries will showcase their arts and cultures during the festival.

The agreement also covers the use of SICHE accommodation and catering facilities at its three campuses in Honiara including Panatina, Kukum and the Ranadi Marine School during the festival.

"The understanding rendered by SICHE is a huge break through for the NOC which has been facing challenges in trying to set up a festival village for the upcoming regional event. I wish on behalf of the NOC to express our sincere gratitude to the SICHE Council and Senior Management team for their support towards this huge undertaking," Mr Eta said.

SICHE Director, Donald Malasa said SICHE is happy to assist with whatever way they can to support the NOC as it prepares to host the festival which is expected to bring benefits to the country.

"We have carefully considered the draft MOA and we have finally approved the request by the NOC by signing this document as part of our contribution towards this huge national undertaking," Mr Malasa said.

Chairman of the NOC, Sir George Lepping described the MOA as a huge breakthrough for his team which will start construction of the festival village and major renovations to existing SICHE facilities to accommodate visiting contingents from 27 countries.
Solomon Islands will host the festival from 1-14 July 2012 under the theme "Culture in Harmony with Nature".

More than 3000 participants from 27 pacific countries will converge to Honiara in July 2012 to showcase the regions unique arts and cultures.
Every four years, representatives of 27 Pacific island countries come together in one of the longest-running and largest celebrations of indigenous culture in the world.

The festival was started in 1972 by the Conference of the South Pacific Commission as a way to stanch the loss of traditional culture through development and assimilation.

It was intended as an opportunity for island communities to share cultural traditions with each other and with people from outside the Pacific region, and it has grown to include a wide range of cultural forms, including dance, music, painting, carving, tattooing, filmmaking, architecture, healing arts, ceremonial arts, navigation and canoeing, culinary arts, fashion design, and many more.

The festival creates a sense of community for small, extremely remote island communities and gives young people, who are most susceptible to cultural corruption, a sense that their cultural traditions and identity are valuable and worth preserving.

Many ceremonies have been revived or recovered as a result of the festival, and many islands have enjoyed growing tourism income as a result of hosting the festival.
Hosting rotates among the 27 participating countries. Last year, American Samoa was the host nation.