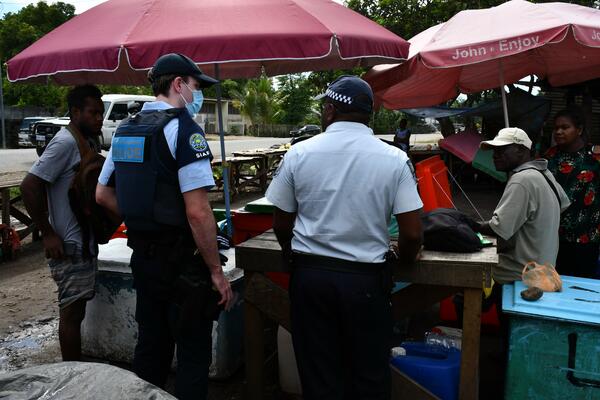 Deputy Commissioner SIAF Heath Davies said Australia has a strong and long-standing partnership with Solomon Islands, and the AFP remains committed to working with partners to ensure the continued safety of the people, institutions and infrastructure of Solomon Islands.
Source: Supplied
Share
Friday, 25 November 2022 12:54 PM

It’s been one year since the Solomons’ International Assistance Force (SIAF) was established to support the Royal Solomon Islands Police Force (RSIPF) in restoring and maintaining law and order in the country.

On 24 November, 2021, the Australian Government received a request from Solomon Islands Government under the Bilateral Security Treaty to assist with civil unrest, leading to the establishment of the SIAF.

Known as Operation Skyray – the AFP has led the operational response, with an initial deployment of specialist operations members, followed by tranches of police, protective service officers and support staff.

The AFP has deployed over 140 officers to the SIAF, undertaking a range of roles in partnership with the RSIPF, including public order management, community engagement, event-based policing, targeted operations and uniform policing.

Through the SIAF, the AFP will continue its support to Solomon Islands and the RSIPF, assisting to ensure the success of the 2023 Pacific Games, which will see the attendance of about 5,000 athletes and officials from 24 Pacific nations.

Deputy Commissioner SIAF Heath Davies said Australia has a strong and long-standing partnership with Solomon Islands, and the AFP remains committed to working with partners to ensure the continued safety of the people, institutions and infrastructure of Solomon Islands.

“Through SIAF, the AFP has assisted the RSIPF to ensure the safe and secure sitting of Parliament, along with providing support to other operational activities.

“Solomon Islands is a valued member of our Pacific family and we look forward to providing our continued support, including through the delivery of policing for the 2023 Pacific Games.”

“The RSIPF thanks SIAF for the ongoing support provided to maintaining the security, peace and stability in the Solomon Islands,” RSIPF Commissioner Mostyn Mangau said.

"I look forward to our partnership continuing as we plan for the Pacific Games in 2023."

SIAF is a police-led response, supported by military components, which brings together contingents from the RSIPF, and personnel from Australian Defence Force, New Zealand Defence Force and the Republic of Fiji Military. SIAF also works closely with Police from Papua New Guinea and New Zealand.

The AFP is joined by a contingent of ADF members representing the Deployable Joint Force Headquarters, Army’s 3rd Brigade, 17th Brigade and 6th Brigade and RAAF No.4 Squadron and Royal Australian Navy’s HMAS Armidale, to support the DFAT coordinated mission.