Aefi School of Excellence Easter U-18 Challenge a Success 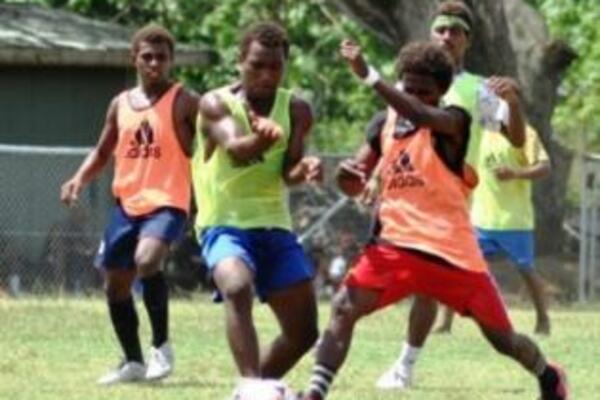 Yesterday the finals were completed with Team Solomon grabbing the top prize of $250-00. They did so after beating Team AC Milan in an action-packed final at the SIFF Academy football field.
Source: Photo Supplied
Share
Tuesday, 06 April 2010 09:02 AM

Severino Aefi has set an incredible example by single-handedly organising the SAS Football Excellence Easter U-18 Challenge. The competition grew out of Aefi's own Football School of Excellence Program which he runs at the SIFF Academy every Saturday.

Last week Aefi planned and sought funding for the SAS Football Excellence Easter U-18 Challenge. He approached several donors but only Namson Tran responded positively. Tran donated $1200-00 for Aefi to run the competition.

Kicking off on Saturday the tournament featured 8 teams from the 150 students that attend Aefi's school of excellence. Each team had 15 players ranging from the age of 15 - 18 years old. No registration fee was charged for entry into the competition.

Yesterday the finals were completed with Team Solomon grabbing the top prize of $250-00. They did so after beating Team AC Milan in an action-packed final at the SIFF Academy football field.

The only goal of the final was scored by Ripson Fox who followed up a free kick that was not fully caught by the goalkeeper and fired home into the back of the net.

Team AC Milan collected the second prize of $200-00. Team Chelsea won the third prize of $150-00 after beating Team Everton by 1 - 0 in the third and fourth playoff.

Special prizes were given to individual players for brilliance including the awards like the Best Goalkeeper, Best Defender and Player of the Tournament.

These prizes Aefi said were to reward players for displaying excellence in different departments of the game.

Speaking at the closing ceremony the Solomon Islands Football Federation (SIFF) Vice President, Stanley Siapu, said that SIFF supports this kind of initiative taken by members of the community.

"Addressing youth football development is a big target of SIFF but SIFF is grateful for the support from the community and Aefi's effort is well recognised and commended by the national football federation," Siapu said.

Aefi thanked Tran for recognising the need for youth in sports development in the country and for supporting his program. He also extended his appreciation to Franco Ne'e and Phillip Ohoto'ona for sponsoring some of the prizes.