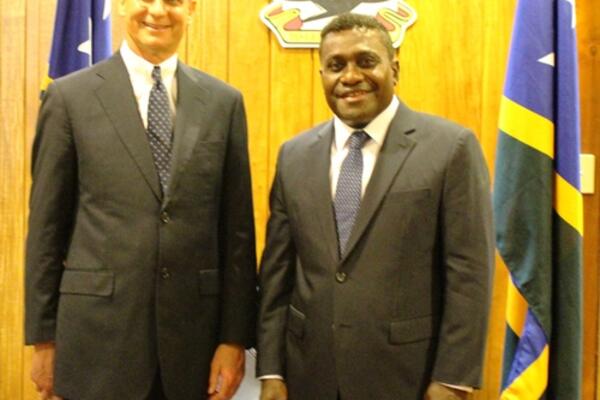 Pastor Ted thanked the Government and the people of Solomon Islands for the warm reception and hospitality shown to him upon arrival.
Source: Government Communications Unit
Share
Tuesday, 11 February 2014 08:22 AM

“We are honored to have you here,” the Prime Minister said, as he welcomed Pastor Ted to the Solomon Islands.

Mr Lilo informed Pastor Ted that Christian churches in the country play a very important role in shaping and developing Solomon Islands particularly in the health and education sector.

The Prime Minister said that the Solomon Islands Government recognizes the importance of connectivity amongst the Church and the people.

During the meeting, Prime Minister Lilo also briefed Pastor Ted on the history of the Solomon Islands as well as the Seventh Day Adventist Church in the country.

Pastor Ted thanked the Government and the people of Solomon Islands for the warm reception and hospitality shown to him upon arrival.

He said he was amazed by the reception he received from people from Honiara and also during his one day visit to Gizo and Kukundu, Western province.

“It is the first time for me to be in this part of the world and this is a historic visit for me. I will make sure I inform the Church members worldwide of your wonderful country and people,” Pastor Ted said.

“I pray for the blessing of God to be upon this beautiful country,” he said.
At the end of the meeting, Pastor Ted shared with the Prime Minister a scripture in the Bible from the book of Joshua chapter 1 verse 9.

He said the particular verse is a list of instructions from God and the right message for a leader like Mr Lilo to lead the country as Solomon Islands heads to the polls later this year.

“I pray for God’s blessing to be upon you as you lead this country,” Pastor Ted told the Prime Minister.