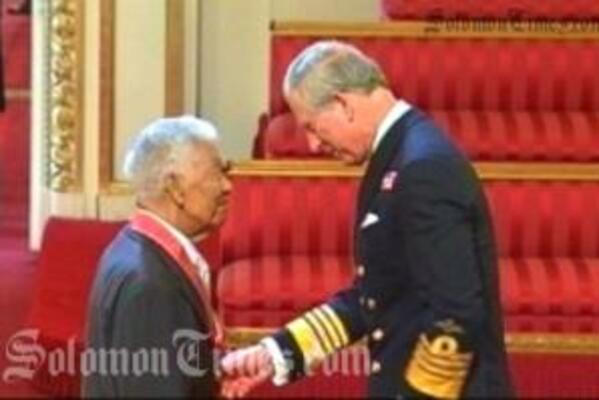 "The Prince was very warm and friendly," said Mr Cameron after the presentation, "and he seemed to be aware of my work which I was very pleased about."
Source: Photo Supplied
Share
Tuesday, 09 June 2009 10:26 AM

The veteran actor Earl Cameron has received his medal as a Commander of the British Empire (CBE).

The 91 year old actor was honoured with a CBE in HM the Queen's New Year Honours list for his "services to drama." In an investiture ceremony held at Buckingham Palace, Mr Cameron received his award from HRH The Prince of Wales.

"The Prince was very warm and friendly," said Mr Cameron after the presentation, "and he seemed to be aware of my work which I was very pleased about."

Mr Cameron attended the ceremony on Thursday 28 May with his wife Barbara, and two daughters Jane and Serena, pictured, who are all Bahá'ís.

Mr Cameron is a well known to many Solomon Islanders, having stayed in the Solomon Islands for at least 15 years where he sought to teach principles of human oneness.

A dedicated member of the Bahá'í faith since 1963, Bermudan-born Mr Cameron - who now lives in Kenilworth, Warwickshire - made his screen debut in the Ealing drama,Pool of London, in which he played a Jamaican sailor on shore leave who befriends a white girl. This was the first British film to show, however tentatively, a mixed-race relationship.

Mr Cameron's most famous screen roles were in two films that confronted racism in Britain - Sapphire (1959) and Flame in the Streets (1961). He also became a familiar face on television in such cult favourites as Danger Man, Doctor Who and The Prisoner. In his 80s, he co-starred as a despotic African dictator in The Interpreter, with Nicole Kidman and Sean Penn. Most recently, he had a cameo role in The Queen with Helen Mirren.