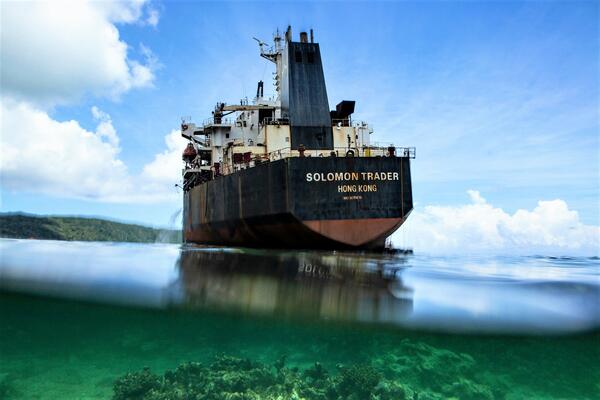 The accession to the Bunkers Convention was triggered by the grounding of MV Solomon Trader in February 2019, which spilled more than 300 tonnes of heavy fuel oil into Kagava Bay, Rennell Bellona Province.
Source: David Maurice Smith for The New York Times
Share
Friday, 26 February 2021 10:25 AM

The Solomon Islands recent accession to the International Convention on Civil Liability for Bunker Oil Pollution Damage (‘Bunkers Convention’) is critical for pursuing compensation regarding the recent oil spill damages in the country.

In accordance with article 14 (2) of the Convention, the Convention has entered into force for Solomon Islands on 15 January 2021.

A detailed environmental damage assessment commissioned by the Government on the Rennell Oil Spill has concluded that the grounding of the ship MV Solomon Trader and the subsequent oil spill caused significant ecological impacts and economic losses in the order of US$14 million –US$38 million.

The Bunkers Convention aims to ensure that prompt and adequate compensation is available to persons inclusive of state parties, individuals and communities to claim for compensation arising from pollution damage and costs of preventative measures taken to prevent or minimize damage.

It further provides for claims to be taken directly against the insurer of the ship. The Secretary-General of the International Maritime Organization (IMO) received the instrument of accession to the convention on 15 October 2020 from Solomon Islands Minister of Foreign Affairs and External Trade.

The accession to the Bunkers Convention was triggered by the grounding of MV Solomon Trader in February 2019, which spilled more than 300 tonnes of heavy fuel oil into Kagava Bay, Rennell Bellona Province.

Now that the Convention has entered into force for the Solomon Islands, the Government is in the process of pursuing owners and insurers for compensation arising from pollution damages caused by MV Solomon Trader and the recent MV Quebec in Santa Cruz respectively.

The Governments’ ratification of the Convention is a step in the right direction in-line with international practices.

The Rennell Oil Spill has also been one of the agendas which the Premier of Rennell and Bellona Province Hon. Willy Tuhagenga and his delegation discussed with Prime Minister Hon. Manasseh Sogavare during a courtesy visit early this week.

Hon. Sogavare strongly urged for actions to be taken to address the compensation claims.